When I came back to life on the blog in early January I said there were two reasons for my disappearance in November & December. The first being my anger and disappointment in the American public for electing a nuclear cheeto as our president – that statement is becoming more literal than we think. You can revisit that post here, if you wish. So what was the second? If you haven’t guessed already by the title, I’m pregnant! Currently, I’m at the end of my 33rd week soooo it’s been awhile lol.

At first, I was really guarded about being pregnant. Even after the 12 week mark, I was pretty nervous. I didn’t want to jinx anything and still don’t, to be honest. I take the no-hitter approach a lot in life – don’t talk about something good so you don’t jinx it. It’s probably silly, but that’s how my superstitious mind operates. So for the first 12 weeks we kept pretty quiet about it. After 12 weeks, the risk of miscarriage decreases significantly, which means you can start telling people. We really wanted to tell as many people as we could in person. Obviously, this wasn’t attainable for everyone so some phone calls and texts had to happen. We both agreed I wouldn’t share it via social media until all family and friends heard the news directly from us. I say “I” here because my husband is not social media active lol. We’ve always thought sharing news by actually telling people was better than a social media post, just a personal thing for us.

As time passed, I was extremely tired. Luckily, I never got sick (except one time when I went into a particularly smelly public bathroom)…so my pregnancy was “easy.” I feel like easy is a relative term though because for me, personally, some things were hard to deal with. Throughout the whole pregnancy, I was beyond exhausted. I would fall asleep on my train ride home…I could sleep at any point or time, still can. On top of that, I had really bad cramps pretty much through week 28. Even though logically I knew they were Round Ligament Pain, they still concerned me at times as I spent hours doubled over in pain. No one ever talks about these horrible cramps – they are so scary and extremely painful!!!

This one is going to sound weird, but I really didn’t/don’t love the attention that comes with being preggo. Everyone is always asking you “how you are feeling” and telling me “how big I’ve gotten.” Strangers have even tried to touch my stomach – nope, it’s not okay to touch a pregnant woman’s stomach. I just wasn’t reacting well to all the attention. Sure, I was as polite as I could be to people’s faces but in private, I was uncomfortable with it all.

Finally, I wasn’t too pumped about my changing body or maternity clothes. For pretty much my whole life, I’ve been in control of body, diet and weight. Even when I wasn’t in great shape, it was my own doing. Being pregnant is completely different. I had a lot of food aversions, the number one being chicken. That one has been difficult because I used to eat a lot of chicken and still needed to get protein. Salads, especially in the winter, were completely unappetizing, and my sweet tooth kicked in like no other. I never used to want sweet – now, I’m basically cookie monster. Working out is completely different too. I come home from work completely wiped and sometimes even in pain, but on the flip, getting up early seems impossible somedays. When I do workout, it’s obviously not the same intensity as before. It’s just been a struggle to not be in control of my own body…been hard to deal with for myself. Lastly, maternity clothes suck. They aren’t cute and expensive. Luckily, I bought a lot of mine on Cyber Monday, so I got good deals, but still, spending so much money on things I a) wasn’t excited about and b) was only going to wear for a few months was not something I was happy about. 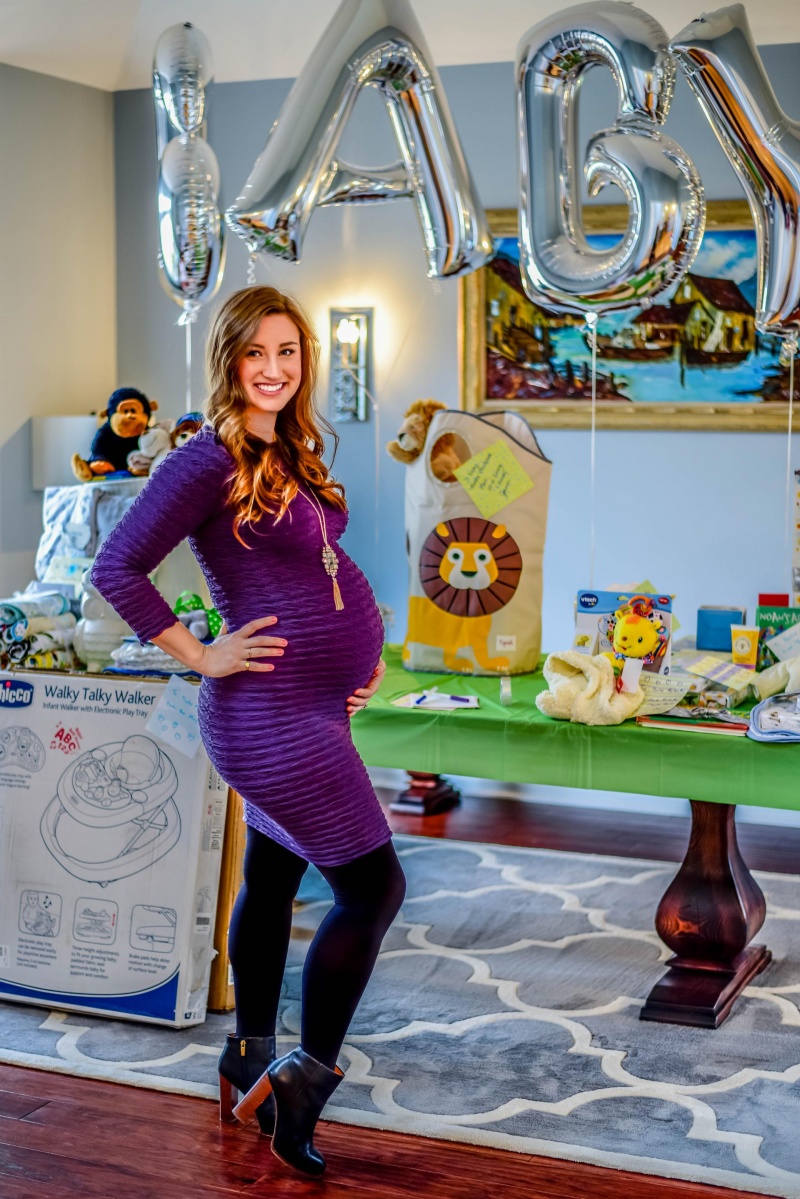 So, that mid-part up there was a whole lot of griping (sorry), but I am actually super excited for our future baby! I’ve always wanted this baby and couldn’t be more ready. I knew the preggo part was never going to be for me, and when friends would ask me if I was scared or nervous for baby, immediately, my answer would be no – I’m so ready for baby!! With roughly 6 weeks left to go, I’m in full on nesting mode. Feel bad for my husband because he’s the one doing all the painting and heavy lifting, but the nursery will be done soon. Then I can’t wait to put away all the wonderful shower gifts, and fill in the blanks with what we still need. Despite being huge and uncomfortable, this is my favorite time because it’s becoming so real!!!

Why share this now? I’m so close to the end that I could have never brought it. I wanted to share because this is going to be the biggest thing to ever happen in my life. Having our baby has already changed me, making me even more passionate about my beliefs. It will be exciting to see what else changes in my life – apparently, I will be even more tired than I already am! Can’t wait, but at least I’ll be able to combat it with some more coffee (being regulated to a cup has been the WORST for this addict.)

As for privacy, I’ve always been a firm believer about not creating a digital footprint for my future kid. He or she did not consent to having his or her picture plastered all over my Instagram or the details of their birth shared on my blog. Obviously, people do those things, and that’s their choice – I just know that’s not for us or our little one. I do want to share some stuff, like the nursery, cute little clothes and maybe postpartum struggles/joys (things about myself.) I’m not going to say you will never see our baby because of that whole never say never thing, but if you do, it probably won’t be in a traditional sense and very limited. I think it’s particularly hard for bloggers who are in the business of sharing to keep things private, but everyone has a line and mine is our child.

In the end, I’m over the moon about what’s to come in our life! It’s going to be crazy, and I’m really ready for this. BTW the pic was taken at the beginning of week 32 before our baby shower started – the cutest I felt all pregnancy since getting big (popping that front leg in pics helps a lot lol). Thanks for stopping by and happy Friday everyone!