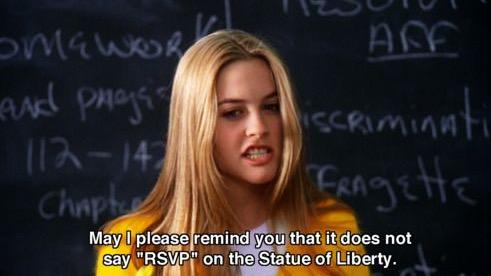 Everyday, it’s something new with this administration. Our current president seems to sign one inhumane, civil liberty-stripping executive order after another. It’s hard to keep track of them all along with maintaining outrage for the orders. Some people, myself included, fear outrage fatigue is going to set in and this is part of the GOP’s plan. They want to drain the public of their energy and efforts in order to wear them down and take away more.

Last Friday’s executive order banning immigration from seven predominantly Muslim countries was not just the latest in a string of terrible actions against our rights and liberties, it was the most appalling yet. This is coming from someone who’s main priority is fighting for women’s reproductive rights and seeing the reinstatement of abomination that is the Global Gag Rule. The immigration ban went into affect effective immediately, meaning people were detained at airports, stranded around the world, unable to get back to the country they called home or were hoping to call home. On top of that, it banned all refugees seeking asylum in the United States from their war torn countries. This was not simply an immigration ban, it was a ban against the Muslim religion. It’s devastating to see the affects of this on families and individuals all over the world. Hearing and reading the stories about people, even children, being detained in airports for doing absolutely nothing wrong is heartbreaking. Keep in mind, that it is illegal to detain people who have not done anything wrong or at least it used to be. Also, these were people that had acquired the proper paperwork to be here. They did it the right way and still the door was slammed in their face simply because of their “country of origin” but in reality, their religion.

Our country was founded on religious freedom along with a separate church and state. These two things are under attack right now. NO FAITH or even lack of faith is better than another. EVERYONE has the right to believe what he or she wants to. Lately, certain people seemed to think their faith is better, more acceptable, more “American” than others. That is revolting, and you should be ashamed of yourself, especially if you are Christian.

Important Articles to Read about the Ban

Where America’s Terrorists Actually Come From via The Atlantic – this article offers excellent facts about how many terrorist have actually been nationalists of these seven countries and/or refugees over the last 20 or so years – spoiler alert, very very very few. Key quote about refugees and terrorists:

“Over the last four decades, 20 out of 3.25 million refugees welcomed to the United States have been convicted of attempting or committing terrorism on U.S. soil, and only three Americans have been killed in attacks committed by refugees—all by Cuban refugees in the 1970s. Zero Americans have been killed by Syrian refugees in a terrorist attack in the United States. Between 1975 and 2015, the annual chance of being murdered by somebody other than a foreign-born terrorist was 252.9 times greater than the chance of dying in a terrorist attack committed by a foreign-born terrorist.”

Also please see the graph the Atlantic provides for the country of origin where foreign-born terrorists come from (banned countries are bolded):

There is more valuable information in this article regarding pre-9/11, 9/11, post-9/11 terror threats, as well as ISIS and US born terrorist. It’s worth the read!

Saudi Arabia and Egypt are excluded from Trump’s ban. Why? via The Guardian – you may notice up there that Saudi Arabia, United Arab Emirates and Egypt aren’t among the countries banned by the president, but hmmm…there seem to be a lot of terrorists from them. Spoiler Alert – it’s because Trump has been business ties to them. ***Please note – I am not calling for a ban for these countries either. I’m not in support of banning any immigrants, but it’s worth noting certain high-volume terrorist countries were left off due to potential conflicts of interests our current president never cares to disclose.

You’re More Likely to Die Choking Than Be Killed by Foreign Terrorists via NBC News – that’s choking on food…so should we ban eating??? Gotta keep that bad food from making us choke.

And finally, what most logical people are saying/thinking:

Trump ban is boon for ISIS recruitment, former jihadists and experts say via CNN – recruiters will frame this as a declaration of War against Islam and Muslims, playing right into their recruiting tactics.

How to Fight This

So where do we go from here? We have to continue to fight. How do you do that? The two primary ways are contacting your representatives and donating/volunteering for organizations that help.

The most effective way of contacting your representatives is calling them. I recently found out my US House of Representative congressman is a republican. I call his office everyday on my way home from work and leave a message telling him what I don’t support that’s happening right now (I have a laundry list that keeps growing). When calling, it’s important to be polite – the people answering the phones are the low man on the totem pole and being courteous will go along way on getting your point across. They will ask you for your address to make sure you are actually part of the constituency (means more if you are). Finally, please inform them you ARE a registered voter and your voting intentions for the next election if they continue to support things you do not support. Hit them where it hurts, their jobs. My republican rep is up for reelection in 2 years so it does actually mean something.

Remember – save their contact info in your phone and call them when you can! You can also e-mail or write them letters, but I’ve heard that is less effective. And PLEASE CHECK YOUR REPRESENTATIVE OUT – I thought mine were both democrats until I actually checked and found out my congressman was not, and I needed to take action.

Right now, the American Civil Liberties Union (ACLU) is leading the way in the fight against the immigration ban. They are stationed at major airports and filing lawsuits against the executive order. This is an excellent organization to donate/support. For more about it and how to donate, please visit their site here: aclu.org

Here is an article with a list of other organizations that are working towards aiding immigrants and refugees right now: Jezebel.com

Each day is going to be a battle, especially until the midterms where we might be able to gain back some hope by flipping the house and senate. Until then, we cannot get fatigued, we cannot stop fighting the indecencies this presidential regime is imposing daily. To end on a light note, I’ve included a clip from my favorite, Clueless: