Argh! Fashion is my favorite!!! But last night’s VMAs fashion was such a major let down. I went to bed last night feeling so underwhelmed and being like, that was it? However, I woke up this morning with a new perspective. We were not playing with many fashion heavy hitters. Apart from a few, it was mostly B squad and below.

So let the games begin!

Vanessa Hudgens in Naeem Khan: I’m feeling it….this is who she is. She showed in a complete look. I go back and forth on the half moon pendant, but I think it’s a keeper. It adds just enough quirk to the ensemble!

Taylor Swift in Ashish: YESSSSSS!!!! This look is what the VMAs are supposed to be!!!! A houndstooth two piece jogging suit! It’s fun, fresh and different! I am all in on everything from the intense eye make-up down to the shoes. Perfection

Selena Gomez in Calvin Klein Collection: On the flipped of Swift is her bestie, Selena. Her hair and make-up look pretty, but despite the lack of bra (which she actually needs for support), this dress and the shoes are Snoozeville, USA. Selena! You can do better than a Morticia Adam’s knock-off! 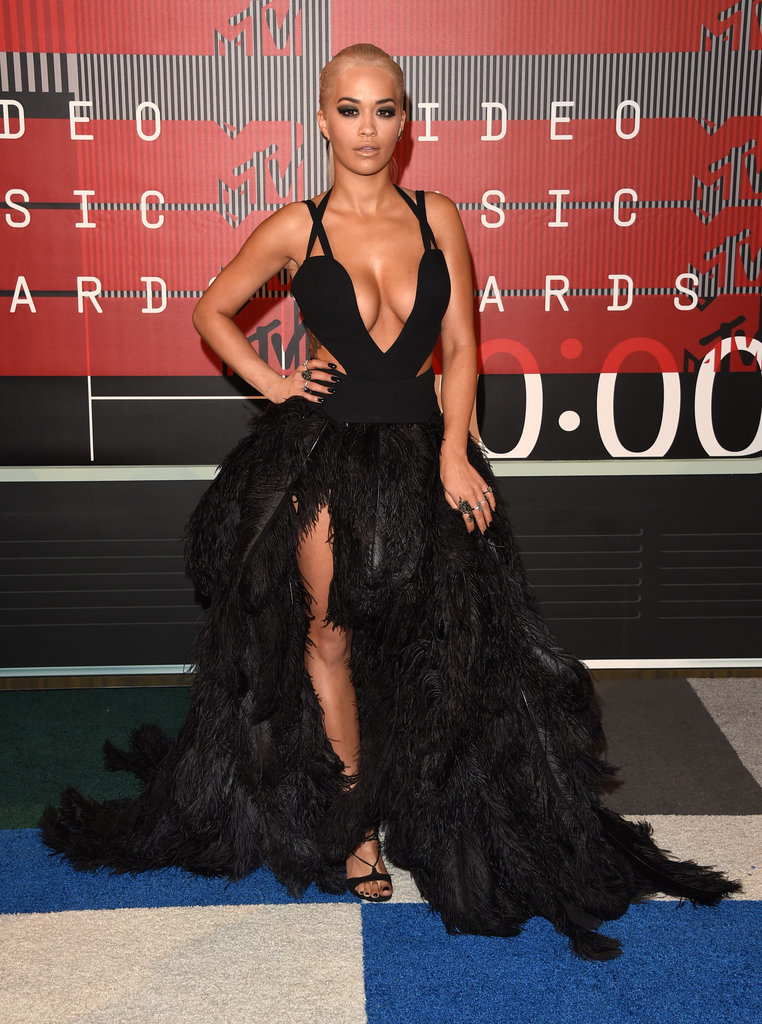 Rita Ora in Vera Wang: Oh dear God…reminds me of a sexy version of what someone in the Night’s Watch from Game of Thrones would wear. Jon Snow Couture. She’s just trying too hard with the deep V cleave and all the feathers and the slit. NO RITA! Tone it down! 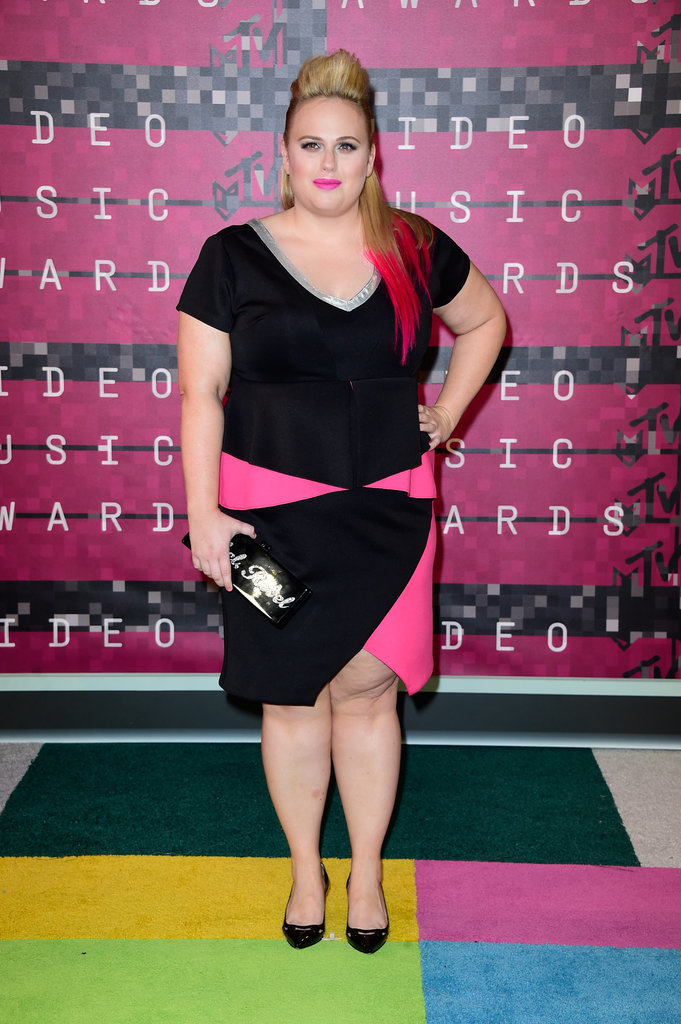 Rebel Wilson in Eloquii: I like the effort, but I feel like the silver along the neckline and the pink tips to match cheapens the look. I get where she’s going. And she’s not the worst, but the outfit messes the mark a little bit.

Nicki Minaj in Labourjoisie: Ummm J. Lo’s done this….twice….almost identically at the 2013 Billboard Music Awards here and then kinda at the 2009 Golden Globes here. Not mention Beyoncé at the 2007 Globes (holy crap I didn’t know she did it before J. Lo!) here. The gold boob dress is done. It’s time to retire it. 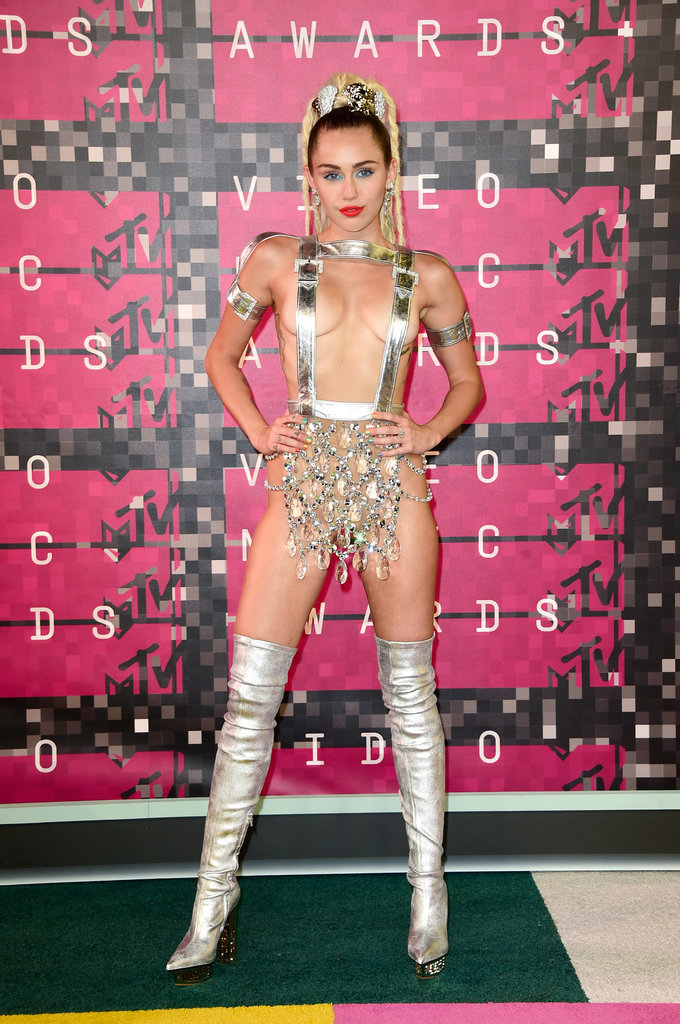 Miley Cyrus in Versace: Egyptian Princess Leia? I just DK! It’s another costume. It’s not fashion (despite the Versace label)…OMG Brad Goreski NAILED IT – SHOW GIRLS!!!!!!! So Ver-sAce (and if you don’t know what I am typing…please VOD Show Girls IMMEDIATELY!)

Kylie Jenner in Balmain: Pretty make-up and digging the Bettie Page wig. Dress looks like something out of Kim’s closet form last year though… 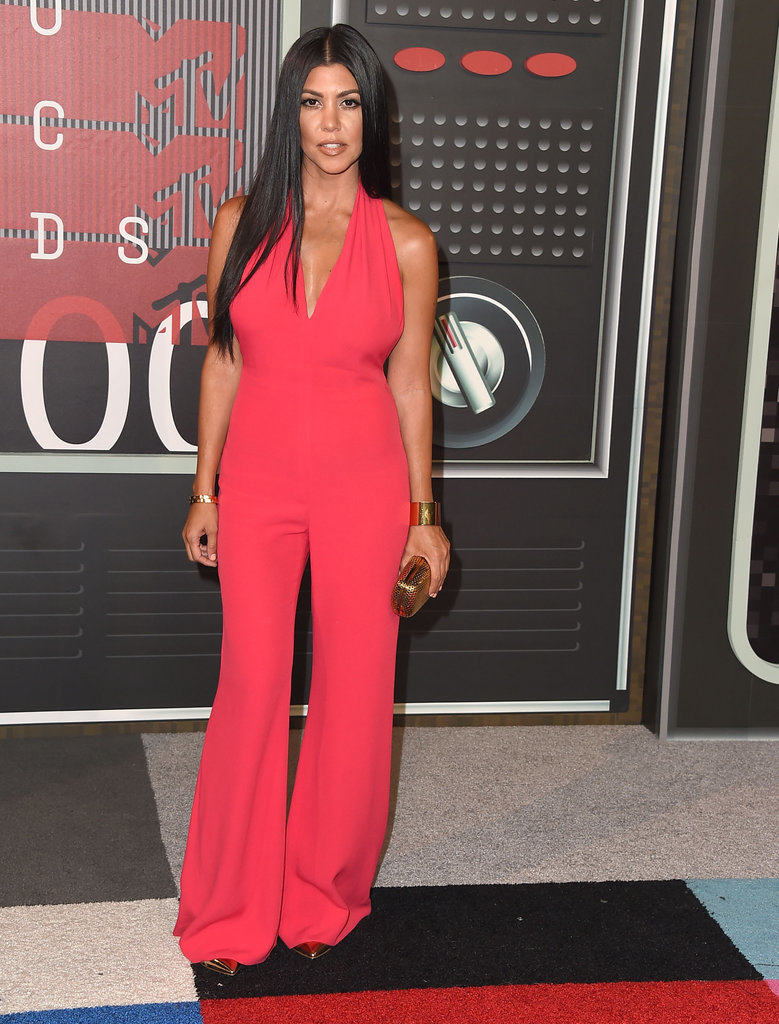 Kourtney Kardashian in idk: I like the Cher-hair and clean make-up. I think she looks good overall. The pants could be hemmed a little better, and the gaps around the bust could use some tailoring too. Not a fail though. Also….kinda similar to Julia Robert’s 2014 pink SAGs jumpsuit here.

Kim Kardashian West in Balmain: Merrrrr….I don’t want to hate on a preggo woman so I will start out with a positive. Love the wet hair!!! Of course lol. So she’s doing my least favorite 90’s revival trend right now, the lace-up…I HATE the lace-up – it’s so Jersey pirate. The material/color isn’t helping anything…she could have done with something that was more structured. Finally, the cargo pockets are adding unnecessary bulk. It was smart adding the shoulder pad though, so there’s that at least! 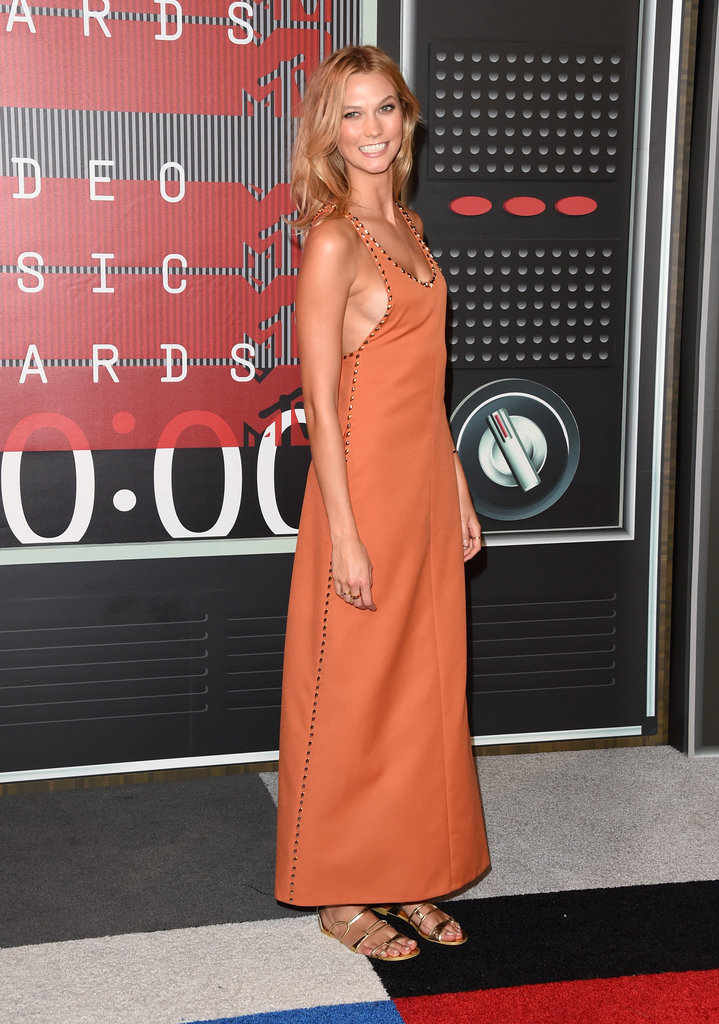 Karlie Kloss in Louis Vuitton: Are you going to a garden party at Gwyneth’s Hampton compound? You are a super model – dress like one! The fit and length are wrong. Flats are in now, but these make the already casual look, more casual. Sorry Karlie…better luck next time.

Hailee Steinfeld in Stella McCartney: I actually love everything about this, even the pant length. The flared leg and length are totally trending. She kept it all youthful and fun, giving us edge with the necklace and the clutch. This was a great addition to an otherwise lack luster red carpet. 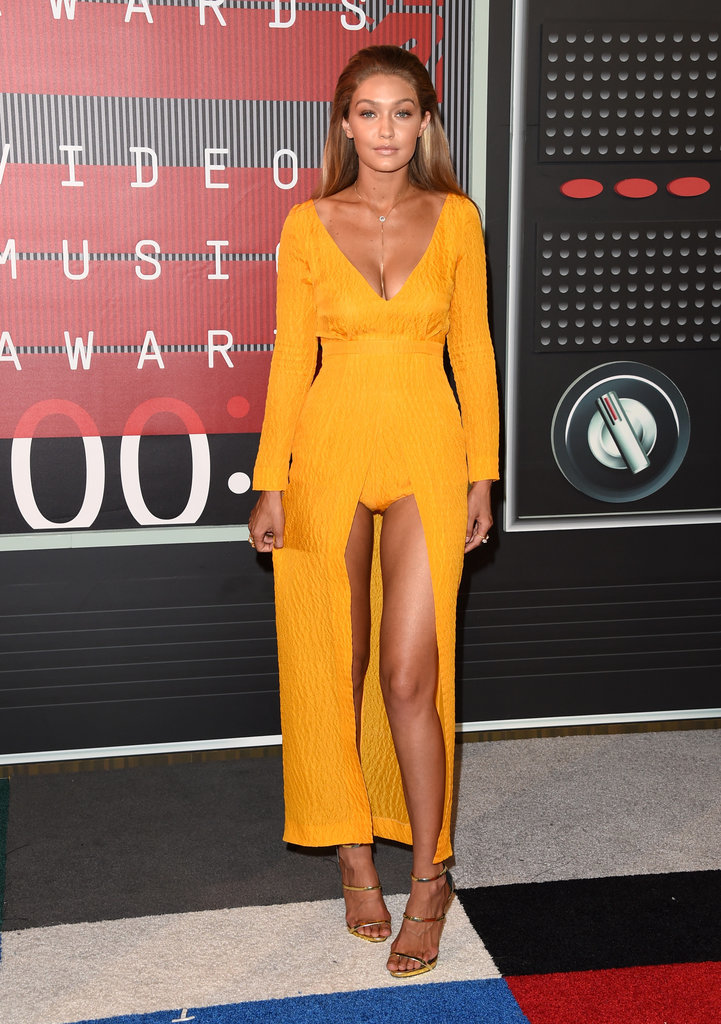 Gigi Hadid in Emilia Wickstead: Gigi!!!!! Gigi is my everything right now. She can do no wrong. This look screams Bond Girl!!!! I’m obsessed. Love it, even the tan with the orange! #gigiforbondgirl

Demi Lovato in Nicolas Jebran: Obvi I love the wet hair! Make-up is flawless….the dress is a lil Kardashian and dated. I would have liked to see her in something a bit more now. Finally, the nude pumps are for the office or a luncheon not the VMAs. They look like an after thought…like oh shit! I forgot to pick out shoes…well, I have these nude pumps so I’ll toss those on, I guess.

Ciara in Alexandre Vauthier: Girl needs to get laid (if you don’t know what I am talking about, google it) because she’s clearly going crazy and ended up running herself through a carwash before the show. Ouch – way harsh…shoes, hair and make-up are good 🙂

Cara Delevingne in Saint Laurent: Nailed it! Perfect way of doing fringe without looking like a flapper! The star print keeps it relevant as celestials were all the rage on the runways. This is a total win for me! 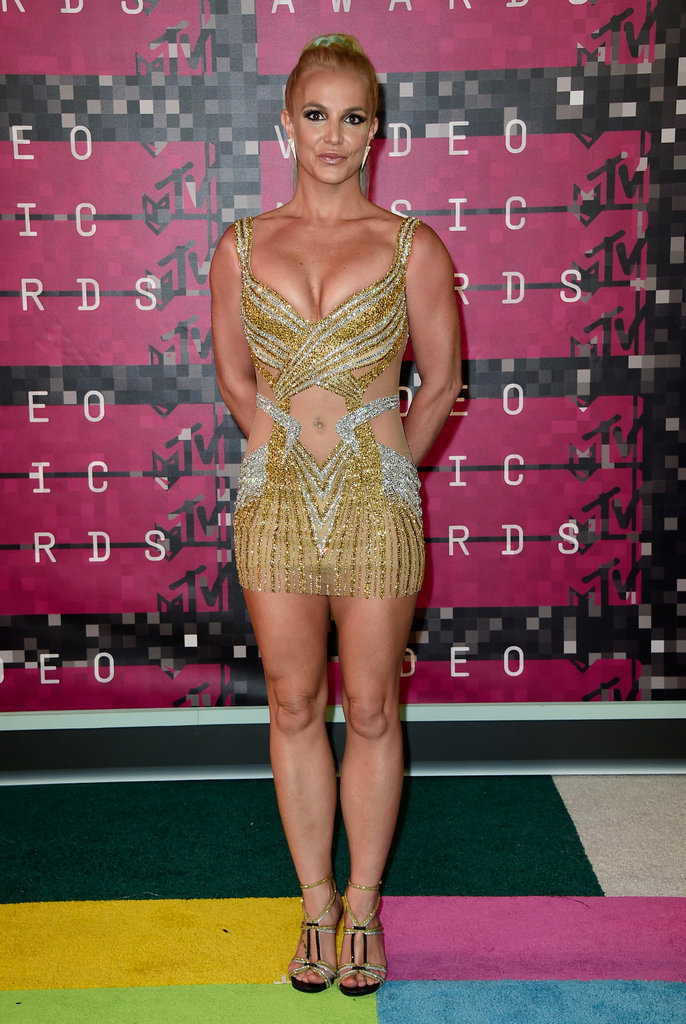 Britney Spears in Labourjoisie: It’s Britney, bitch? I mean, I love Brit Brit….and she looks good for herself. I just wish for a lil more. I like what she wore to the 2015 Teen Choice Awards (here) better.

All right! Best and worst dressed!!!

My best has to go to T. Swift with runners up Gigi Hadid and Cara Delevingne!

My worst hate do it this but Nicki Minaj – she should be better than showing up in a dress that has already been done, several times. Runners up are Ciara and Karlie Kloss!