***Note: This is the start of a new (hopefully) weekly column called Friday Feels. For a brief overview of what Friday Feels is all about, please click here. 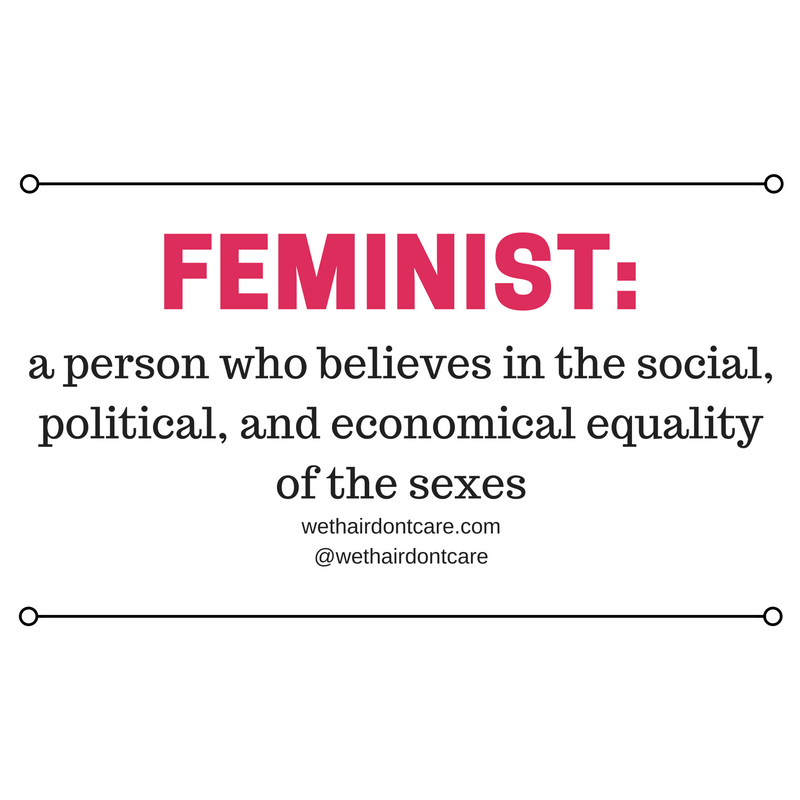 It took me awhile to figure out what my first Friday Feels post was going to be about. The world is a mess right now, and there is so much I want to talk about from the election to Colin Kaepernick and the National Anthem which corresponds to Black Lives Matter. Then there are even some lighter topics like Vogue vs Fashion Bloggers which is kind of interesting and a little bit hilarious that both sides are taking themselves so seriously.  After thinking about what social issue is my number one, top priority right now everyday and has been for basically my whole life, the decision of what to write about was a no-brainer. Feminism. I am a feminist and am proud of it. This is beginning of all social issues for me, personally, and it branches out from there; therefore, it only made sense to start here with gender equality.

This is going to be kind of silly, but I want to start by giving the definition of feminism.

Feminism: the belief that men and women should have equal rights and opportunities *Merriam-Webster Dictionary

So why did I start with the definition? Because feminism is legit that simple. Equal rights and opportunities for all men and women. If you believe men and women are equals and should be treated as equals, then you believe in feminism. Over the years, feminism and feminist have gotten a bad wrap…they are angry and agitators, want to put men down and don’t need men in their lives or anyone for that matter. That couldn’t be further from the truth. Feminist just want equality for women. It sucks every time a celebrity, especially female celeb, says she’s not a feminist. They continue to perpetuate the stereotype that feminism is bad, too tough, or too aggressive. It’s hilarious to me that they also include a “I’m a strong woman though” or “I really support women” statement in there. You aren’t doing ANYONE any favors by declaring you are not a feminist, especially yourself and your own gender. (Sidebar: I looked up humanist because several of those celebrities mentioned they are humanist, and it has nothing to do with equality…so yea, they are missing the boat, big time.) I think the great Maya Angelou said it best when she said, “I am a feminist. I’ve been a female for a long time now. I’d be stupid not to be on my own side.” On top that, male or female, anyone can be a feminist. It’s easy – you just need to work towards gender equality! I know plenty of men who are proud feminist as well.

I think I’ve been a feminist my whole life, and I have my mom to thank for that. From the day I was born (and probably while I was in the womb), my mom taught my sister and I that a) girls can do anything they want, no matter what, b) they can do anything just as good as any boy out there and c) that my sister and I could be whatever we put ours minds, too. She encouraged us to kick butt in all sports we played…she wasn’t even mad at me when I got yellow and red carded in co-ed AYSO kids soccer. Instead of telling me to play more like a girl on the field, she would tell me to focus, concentrate and kick butt! And that’s exactly what I did. It wasn’t just with sports, she stressed the importance of academics. She wasn’t pushing my sister and I to be the best girls out there, but to be our best selves and never take any crap from anyone. That last part is important because as a woman, you take a lot of crap in life.

Thanks to my mom, I was born a feminist. However, I didn’t start to realize what this meant until probably middle school when life starts to change for girls. The girl’s dress code was stricter than the boys. Apparently, my 11 year old legs in shorts that didn’t go to the bottom of my middle finger tip bothered people – gross. Other things started to pop like the difference between boys magazine vs girls magazine, still an issue 19 years later. Not to mention the encouragement boys received to pursue math and science; whereas, girls, on the whole, did not get that push if they weren’t already excelling in those subjects. It’s funny how much changes from elementary school when kids just look like kids to middle school, when puberty happens and bodies change. After noticing the differences in treatment between boys and girls, I became aware that I was a feminist.

Now, more than ever, being a feminist is so important to me. After everything that’s been done by the women and men fighting for equal rights before us, there is still SO MUCH that needs to be accomplished. On top of that, the fight is just as hard as it has previously been. Some of the gender equality issues that are left outstanding (and deserve their own posts in time) are:

This list is just a highlight of issues that women are still facing today. I am sure I missed some, but they will come to me eventually and get covered. I started with feminism for Friday Feels because it’s really about equality for all. I truly believe in equality, not just between men and women but for everyone including minorities and LGBTQ community. From here, I hope to cover the issues in the list above as well as other issues of inequality and injustice our country faces today.

So am I some angry feminist? No, despite getting worked up about some of those issues. I can promise you though, I will continue to fight for equality for all women for as long as it takes.

Hope you enjoyed my first Friday Feels post. If you didn’t get a chance to read the explanation on Friday Feels – click here. Stay tuned for more, and no, they won’t all be so serious! Promise 🙂