I’ve been MIA lately from social media and posting new content on here. This past Monday, our best friend in the whole world passed away. It was the worst day ever. Rucus Edmund was the greatest kitty and an even better friend to both my husband and myself. He lived 16 and half amazing years filled with sunbathing, treats, catnip and sushi grade salmon, but unfortunately was taken too soon to a rare and aggressive form of mouth cancer. He deserves so much more than this post, but I want to try to share how important he was to us.

Rucus was born on November 13th, 1999 in Tallahassee, Florida. According to the shelter my husband got him from, he was found in a box with his brothers and sisters in an alley. My husband picked him because he was the runt of the litter and brought him home to his dorm room at Florida State University on Martin Luther King Jr. Weekend in 2000. That’s when their unbreakable bond was formed. Living up to his name, Rucus caused mischief in the dorms, like any college student really. He’d take his little kitty paws, stick them under the door and swipe at people walking past him in the hallway. Eventually, the RA confronted my husband

about having a cat in his dorm room, and my husband was like I don’t have cat – the RA was like no, we can see him sitting in the window, you need to get rid of him. My husband was like no way, school is out in a few months and I live in a single. He basically told the RA to suck it and kept Ruc right where he was. The remainder of Rucus’ college career was spent partying in an apartment with my husband, his brother and one of their friends. I really feel like this is where he got his fun, look at me personality. He wasn’t like most cats who hid from people. Ruc was a show off through and through. He knew he was the cutest and loved to be the center of attention. Apparently, when he was a kitten he did not want to cuddle or sleep with you (that eventually changed) so when he did my husband and his bro had a rule that you couldn’t move an inch of your body if he was laying with you. This rule pretty much stuck his whole life which meant you were stuck snuggling with him in some pretty weird positions. The man gave you many a crooks in the neck, that’s for sure.

After graduation my husband and Rucus moved to Tampa, and eventually they decided to take their talents to Chicago. Ruc will forever remain a Florida State Tallahassee Townie, though. The journey up to Chicago was not without its problems. 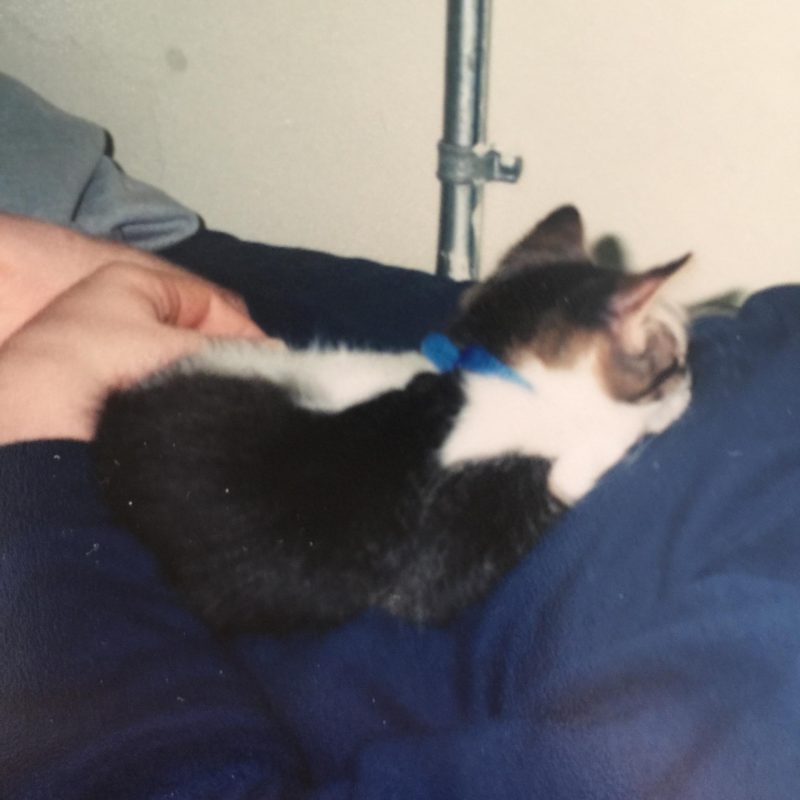 My husband and Ruc packed up the U-Haul and were ready to make 18 hour drive from Tampa to Chicago. Well, somewhere around Atlanta their U-Haul started overheating and the only way to combat that was to turn the heat on the truck to draw it off the engine in the summer, in the south. This meant the two of them were ROASTING in that truck. My husband would take bottles of water and soak his little buddy to cool him off which of course, Rucus hated because, ya know, cats HATE water. They obviously made it up to Chicago which I think Ruc was probably like ummm why is it so cold here (even in the summer)? Our buddy LOVED the heat (more on that later).

In Chicago, our Rucco helped my husband through an extremely hard time in his life – that is his story to tell and not mine, but it was intense and without Rucus’ love and constant attention, the ending of that story may have been different. My husband is eternally grateful to him for everything that he did. Other than that, they were two bachelors living it up mostly, until they met me. I will never forget the day I met the love of my life – I’m talking about Ruc of course, my husband is a close second lol. My husband was making chicken cacciatore for me, and we were going to watch a movie we rented from BLOCKBUSTER! Lil preface – I am allergic to cats, like very allergic. I know my husband buzzed lil buddy into his lion summer cut (even though it was mid-August when I was coming over), and the two of them spent all day cleaning the house to make it spic n span for me not to get sick. When I came over, I didn’t touch Ruc, and he didn’t try to touch me. We stayed clear of each other for a good three months before contact. By then, my body started to build up some immunity to him, and I was finally able to pet him without having an asthma attack or severe allergic reaction. Over the years, Rucus and I became closer and closer literally and figuratively. At one point he was sleeping next to me in bed when in the middle of the night I heard a thud. I had accidentally kicked him off the bed – he was out cold and didn’t get a chance to land on his feet, poor guy!

I have countless stories about him. His life could be a novel it was so funny sometimes; however, I’m gonna try to just tell some of the highlights that stick out for us. At one point, we lived in an apartment that had a greenhouse type room and upstairs there were sliding glass doors that opened the second floor rooms to the greenhouse room below. Well, our lil buddy loved to walk on this thin ledge that connected the doors – I’m talking about only like maybe 4 inches wide. On a random weekend day, sitting in the living room watching tv, we see him fall from the second story, land on his feet and shake it off. The lil shit lost his footing on the ledge above and fell from the second story to the greenhouse below – he was fine lol. When he made these stupid mistakes he acted like they never occurred – he played it cool.

He did NOT like it if you left him for an extended period of time and when you returned, he was going to let you know he wasn’t pleased. First, he would meow like a crazy cat until you held him for a good 15 mins and gave treats/food and a ton of pets. Then the anger and betrayal would set in. He would sit in the same room with you but not actually with you, giving you the stink eye, making you feel like pure shit for leaving him THE WHOLE TIME. One time in particular, I personally went away for a lil over a week when I had been working from home full-time. He had gotten used to me being around 24/7…well, I did not receive a warm welcome when I returned home. It was more like mom, how could you leave me for over a week with just dad? I gave him tons of pets and cuddles to try to make it up to him. It did not help the situation. One morning, shortly after returning home from the trip, I grabbed my gym bag for a workout…to my surprise, it was wet. Ruc struck again! He peed on the one possession I used literally everyday, my gym bag, just to get back at me for leaving. He had never peed on it before and never did it again…he was definitely letting me know how he felt about me leaving him – don’t do it!

The man was an eternal sunbather – he could beat a Miss Hawaiian Tropic in a sunbathing contest any day of the week, hands down. Sun was his everything, but his second everything was the heated Kitty Camper we bought him in 2010. He loved being warmer than warm. His toy playing skill were the best, too. Lil bud could play with his furry catnip filled friends all day long. Sometimes we’d come home from work and find his toys in all sorts of places, even different rooms. Finally, next to treats, he loved a good catnip plant more than anything – well, he also loved sushi grade salmon, regular salmon, rib eyes, deli turkey meat, chicken, ice cream, milk, egg yolk and butter more than anything, too – He never passed up a good meal, smart man.

Despite his occasional antics, he was our best friend. I’m not joking. Sorry to everyone else who is friends with us and reading this – he was legit, no joke, our number one, numero uno, best mother fucking friend ever. There was always a joke about who is number one in my husband’s life – me, Ruc or his brothers…EVERYONE knew the answer – it is Rucus. No one can ever top the unconditional love Ruc gave us. He was always there for us, no matter what. Never fail, he was waiting at the door for us to come home everyday. When we would walk around the outside of our house, he would follow from room to room, just to be with us. After I got home from work and we said hi, he would wait for his dad to come home in the same spot everyday. And when his papa came in the door, he would come running up to him, so happy and excited to see him.

We loved our little body more than anything. I know, I KNOW, everyone says that about their pets, but I cannot stress how important and vital he was to our lives. When we were sick or down, he always knew and cuddled you until you felt better. He was the best cure for anything. Nothing will ever compare to that prance up to you when you got home from a long day or him following you around the house from room to room, even getting trapped in the closet or basement a few times on accident. I love our baby so much and miss him everyday. My heart literally hurts – it feels like there is a giant weight on my chest and I can’t breathe, and every time I think about him I get choked up and start to tear up. Even right now, sitting here outside writing this post and I look up to see if he’s in one of the windows sunbathing. He’s not in any of them like he should be…

Little buddy, Rucus Edmund, was our everything. Even though he lived an amazing 16 and half years life filled with so much love, sun and sushi grade salmon, we still wish he was with us. I know he’s still watching over us and following me from room to room right now, but buddy, just wanted to tell you we will always love you.