This is your most BASIC stuffing recipe on the planet. It’s kind of a combo of my family’s, my husband’s family and good old Pepperidge Farm‘s recipe. I say it’s a hybrid because all of them added or did things I did not, but the concept is still there. At points, I will let you know when you can add in other items to zest things up, if you care to.

Next thing – we kept this recipe VERY simple like I said above, but if you are the kind of person that likes the turkey neck, heart and gizzards, you can add that in as well. Just take the stuff from the baggy, rinse it, pulse it in a food processor so it’s chopped up and then brown with the sausage. My mom is super into the gizzards for some reason and buys extra chicken gizzards, too…so the choice is yours.

One more thing, I am still new to blogging and forgot to take the end result picture!!!! I AM SO SORRY!!!! I actually have a picture of it in the turkey when the turkey is done, but you are supposed to do one more step and then it’s dunzo. I think I was so hungry when we did this I completely forgot and ate it. At the end, I’m going to include a pic from the Pepperidge Farm’s stuffing recipe so you should know what finished stuffing should look like. I’m really sorry about this, and I grappled with the idea of even doing this post but decided to anyways.

First things first – finely dice up your celery and a whole white onion. This recipe is just cooking with celery (4 stalks) and the onion. My family’s recipe calls for green onions (about 3 – 5 stalks depending on how much you like them) and mushrooms (about 1 cup of fresh mushrooms diced). At this time, if you want to add in one or both of those, chop them up as well and set aside. 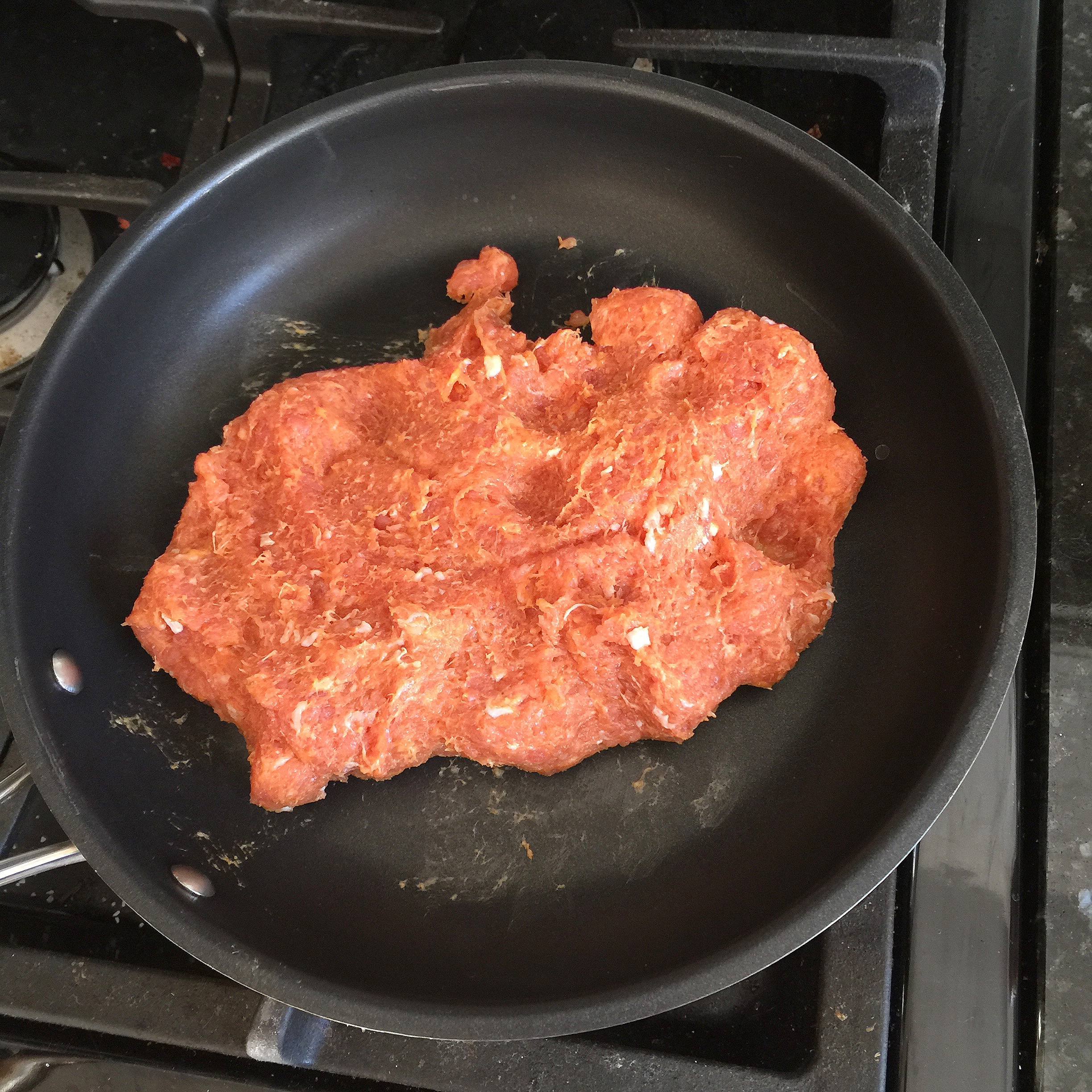 Begin browning your sausage over medium to high heat. Here I used hot Italian turkey because it was just the husband and I, and we like everything ridiculously hot. For the family, I am going to take it down a notch. Husband’s family recipe calls for Italian sausage – my family’s calls for polish sausage. Not sure which I will go with day of, but you can take your pick! P.S. the turkey sausage is my preference but feel free to use pork if you’d like. 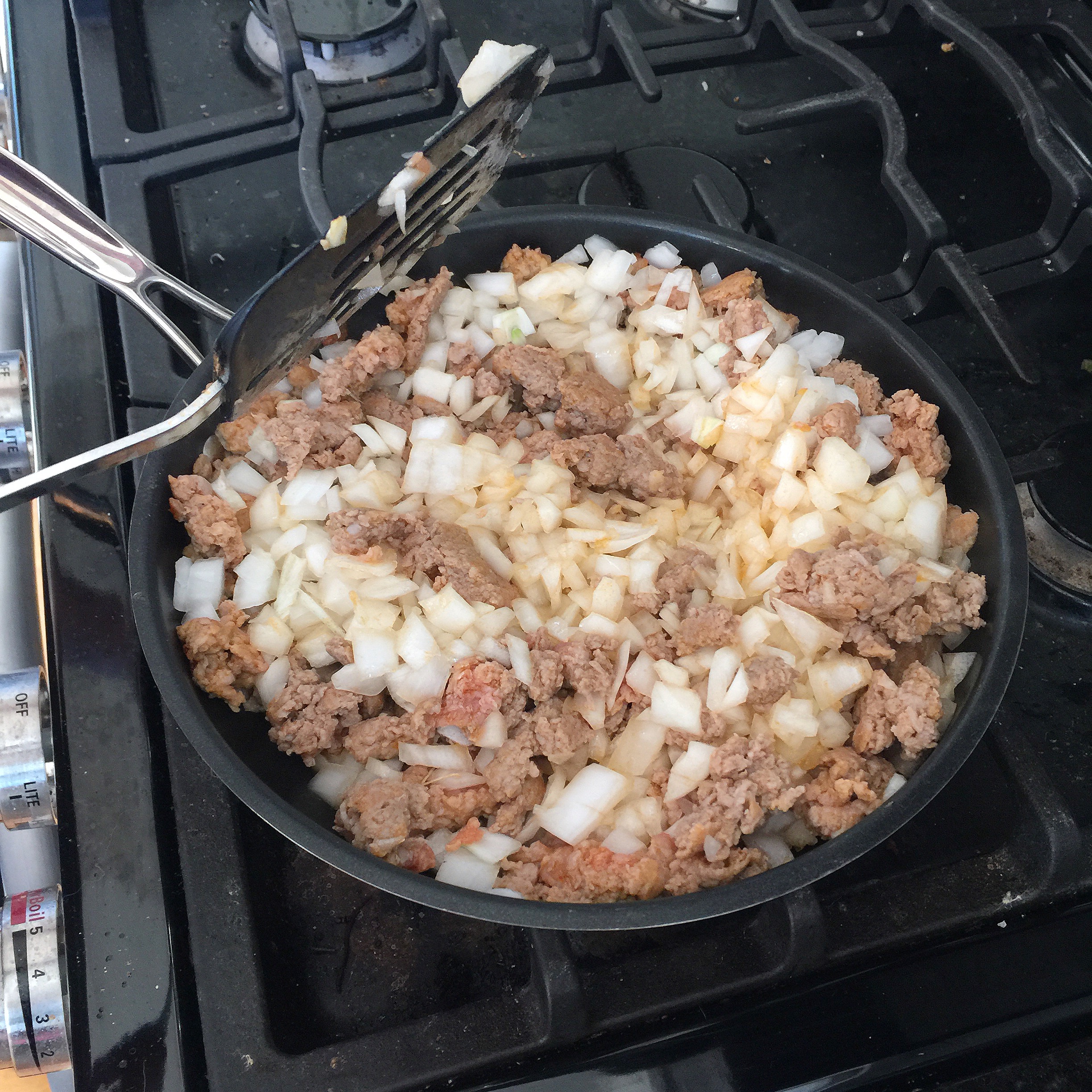 After it’s browned a little, add in the diced onion and allow them to brown and saute together for a minute or two. 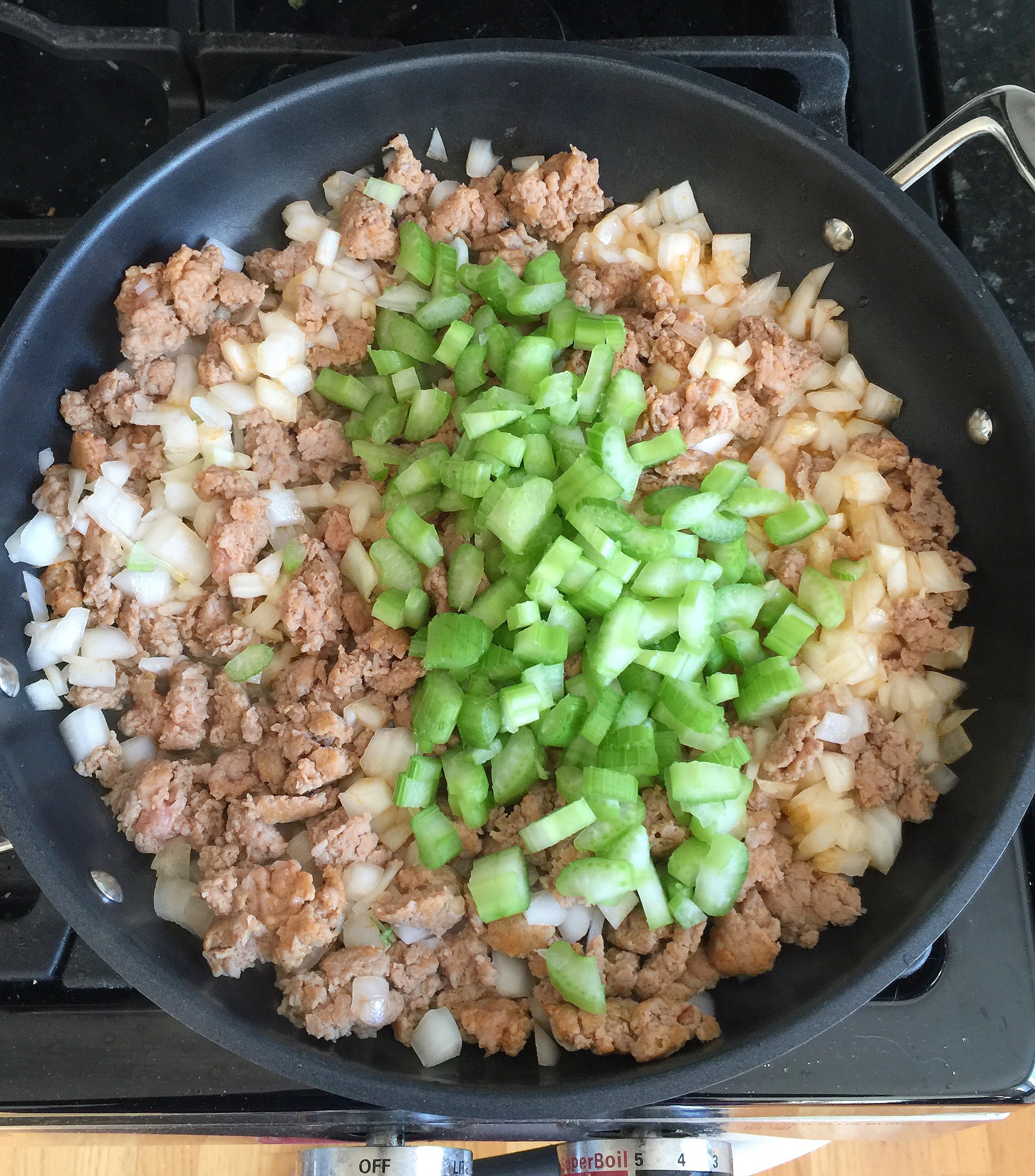 Then toss in the celery (and green onions if you choose) and mix together. About 2 mins after adding the celery feel free to add the mushrooms if you are putting them in. 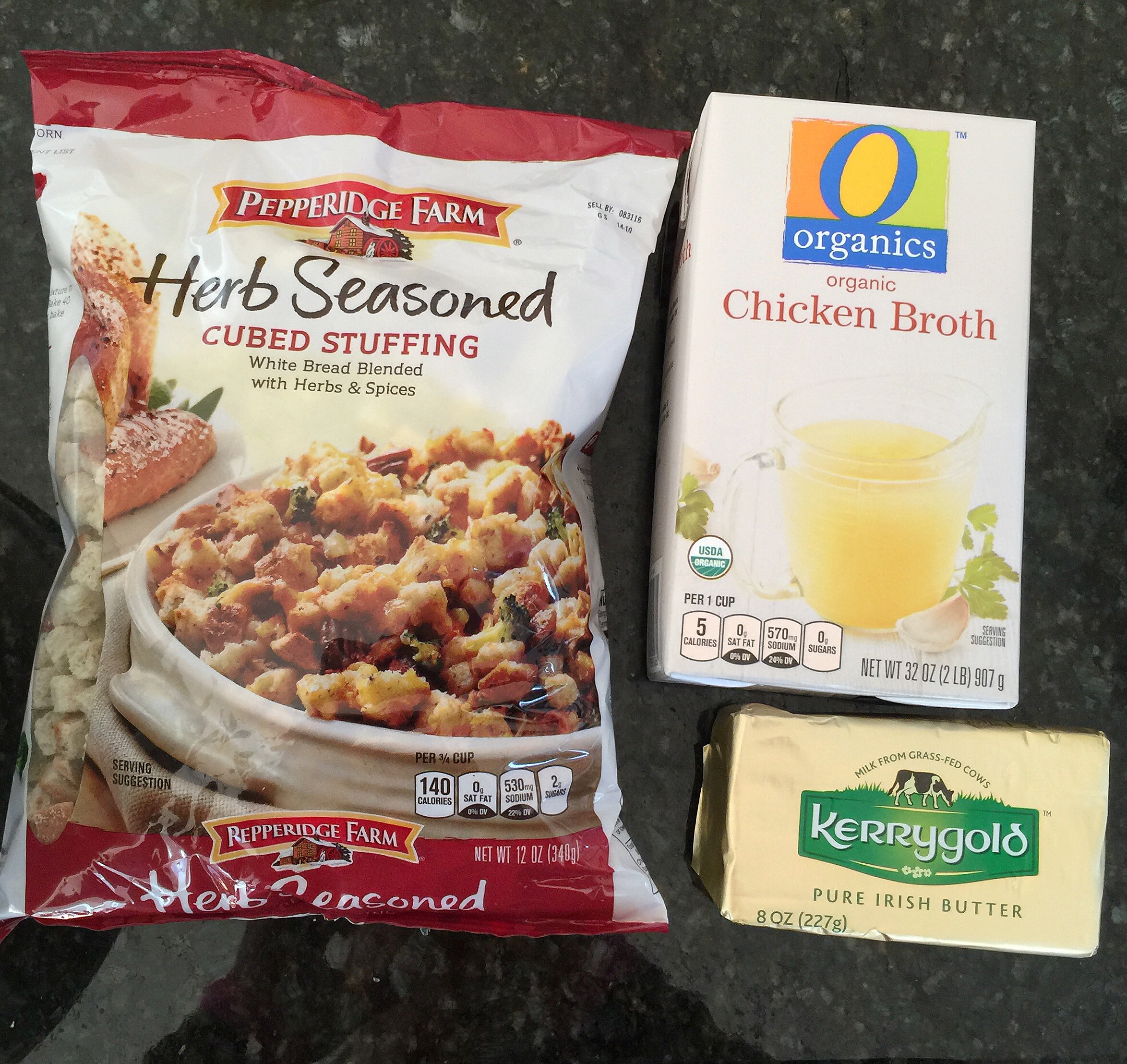 While your sausage, celery and onions are cooking on the stove grab your other ingredients to prepare for the next part. Pepperidge Farm CUBED bread crumbs – cubed is important, we have only ever used cubed and crumbs are too crumbly. I grabbed herb seasoned, but you can do onion and sage (that’s what my mom’s recipe calls for), and if you are doubling this, which I will have to on T-day, you can do a bag of both. I think that’s my plan. You will also need chicken broth and butter. Kerrygold is my favorite butter of all time. It’s amazing!! Remember to stir the meat/veg mixture on the stove occasionally so everything cooks evenly and nothing burns. 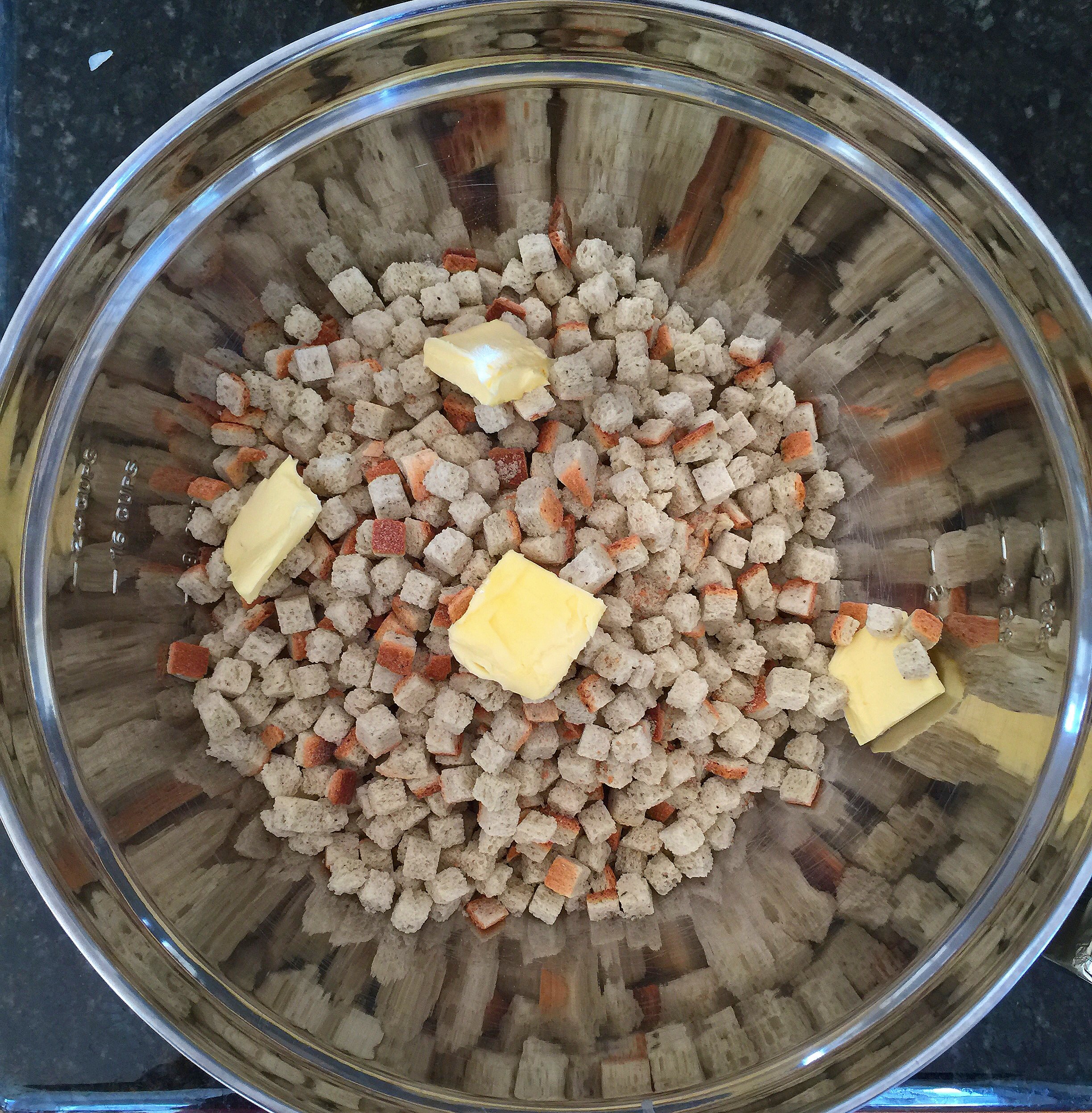 Empty the bread crumbs into a LARGE mixing bowl. You will need a BIG one, and if you are doubling this, you might have to do it in two waves.I tossed in four hearty pats of butter. This is entirely up to you and your family’s tastes and dietary needs. Pepperidge Farm’s recipe has no butter – my mom uses a whole stick. I think my mother-in-law uses close a fair amount as well, but I don’t have the recipe directly in front of me. Since this was just a rando weekend for the two of us, I kept the butter light. For T-day, I will probably increase the butter quotient because it’s TURKEY DAY! 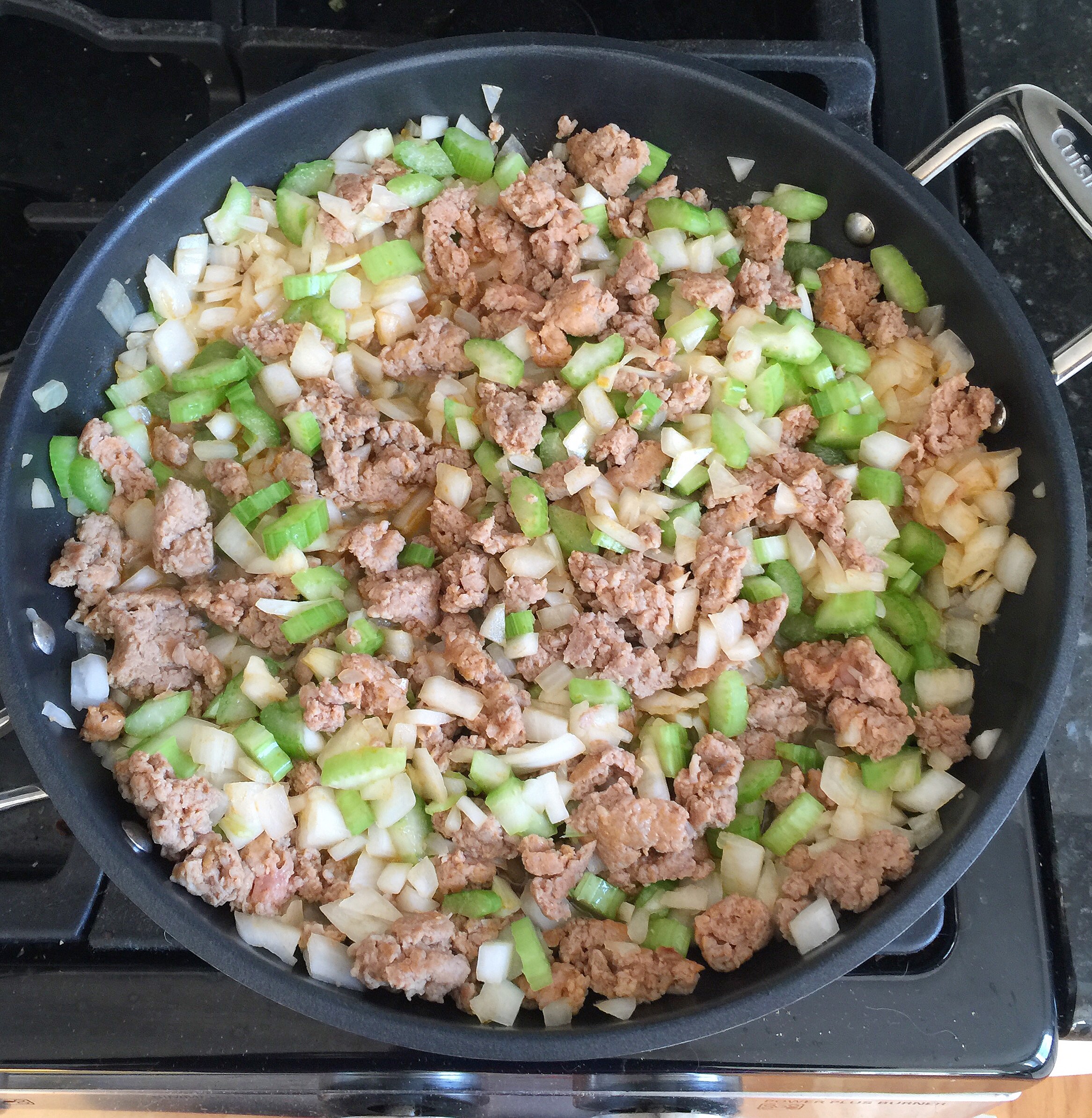 Cook all that jazz on the stove top until the sausage is brown and the onion is translucent. 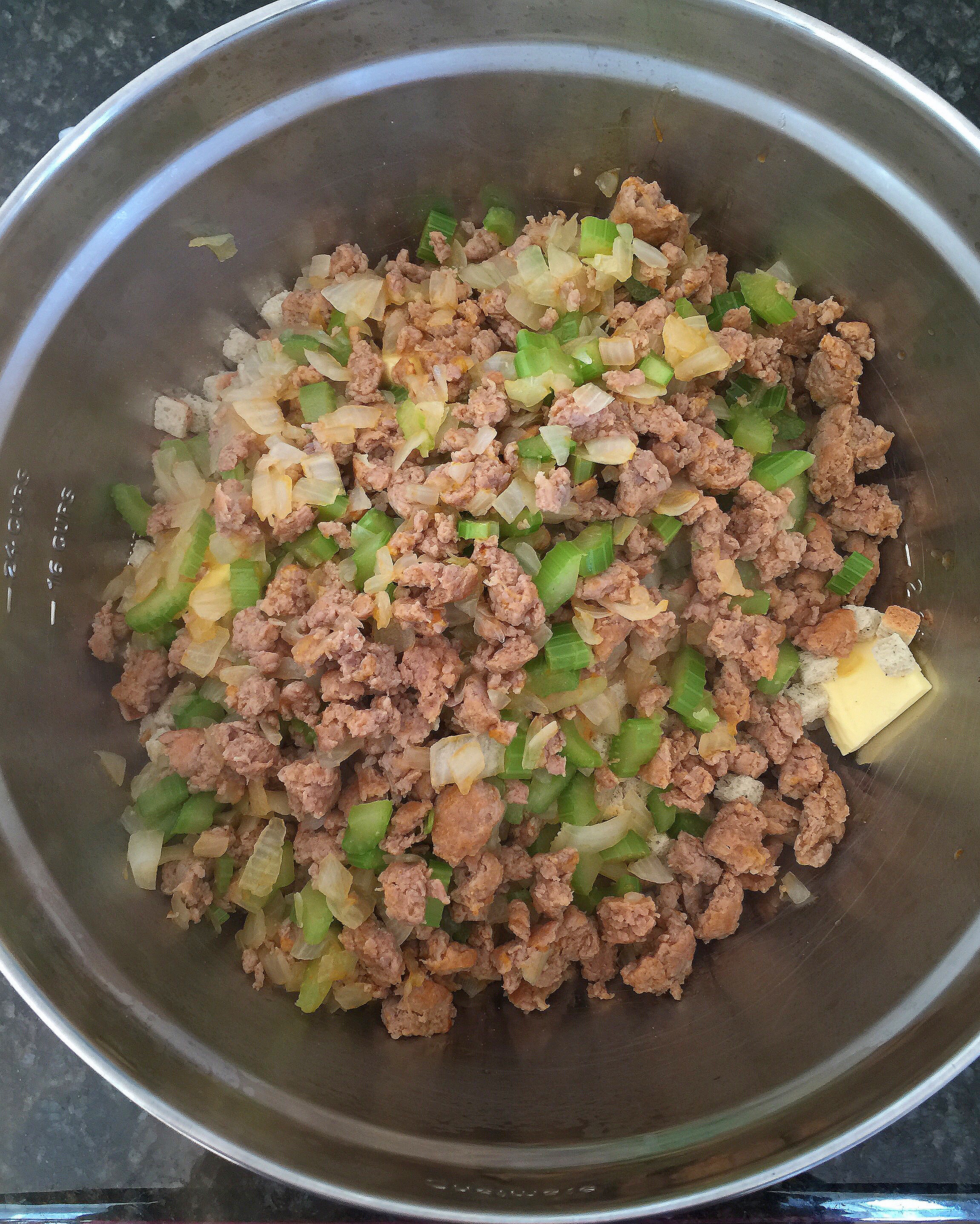 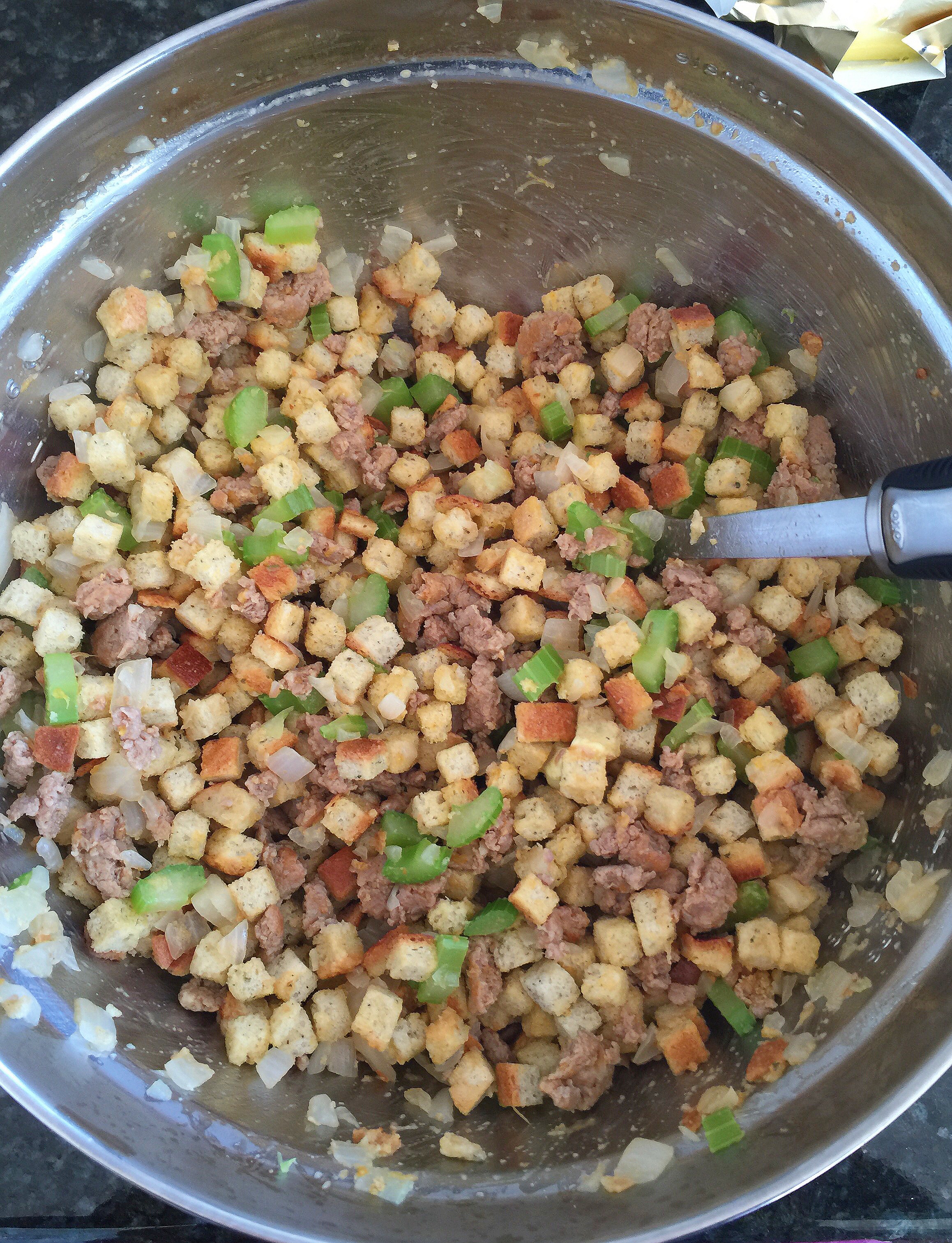 Stir it all together and begin adding in the chicken broth. 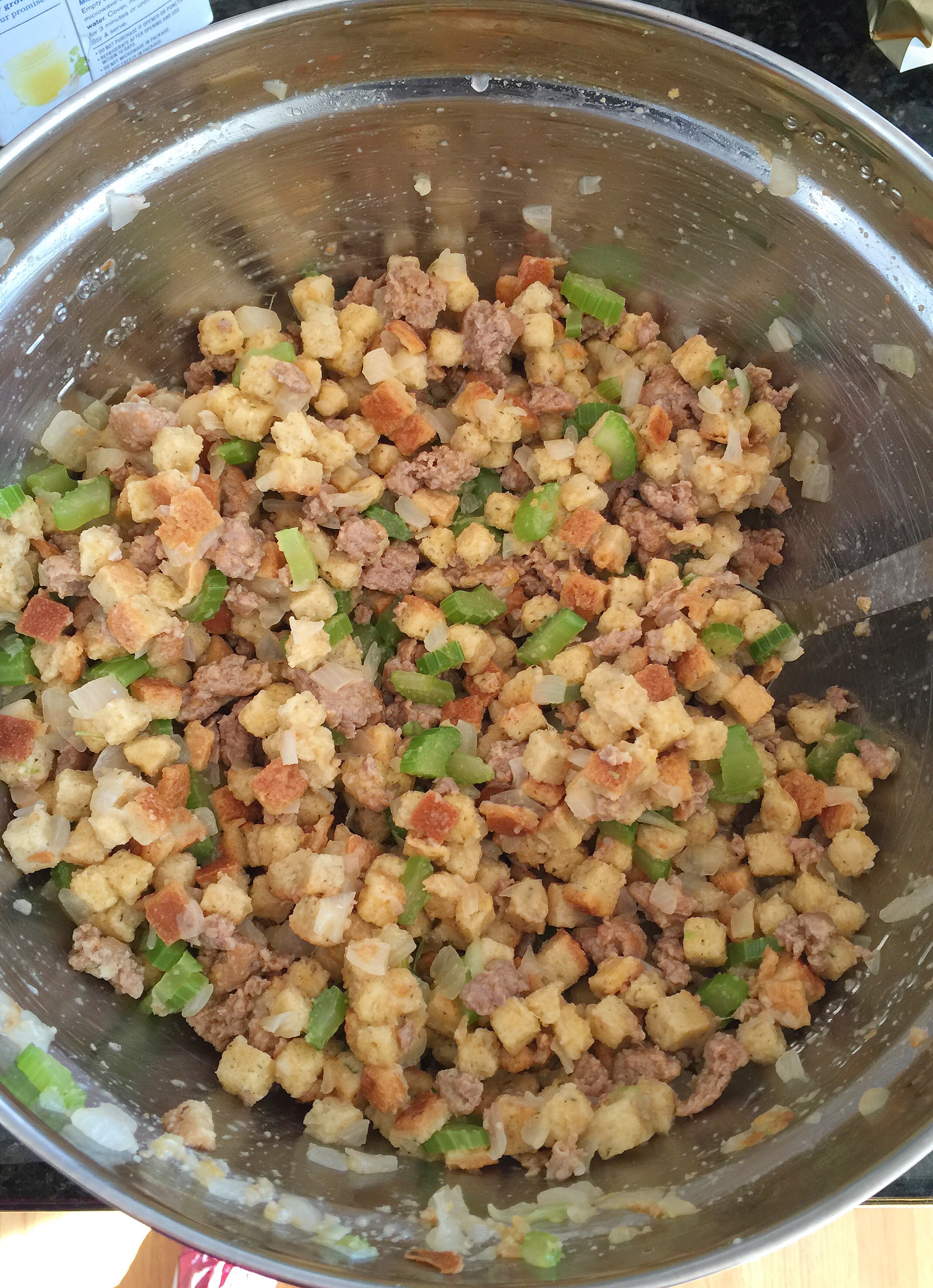 Continue to stir and add broth until the mixture is moist (sorry to use that word) but not mushy. If you were to eat a bread crumb at this point, it would have give but a lil crunch still. You don’t want it melting in your mouth. For this batch, I estimated I used about three quarters of a cup of broth. Definitely use your judgement. This mixture will continue to cook, especially if placing in the turkey. If you are transferring the entirety or a portion to a casserole dish, you can error on a full cup probably because there will be less juices involved.

Next up, stuff your cleaned bird! Make sure he’s washed inside and out. Don’t use real soup though, just a thorough rinse in the sink, pat dry.

Place the remainder in a covered casserole dish. I read on Pepperidge Farm’s site, if you want it crunchier, you can keep it uncovered…that kinda intrigued me so I might removed the cover with like 10 mins left to go. Place the bird in the oven and cook for it according to the instructions. About 30 – 40 mins before the turkey is dunzo, put your casserole dish in with it (refrigerate before then). 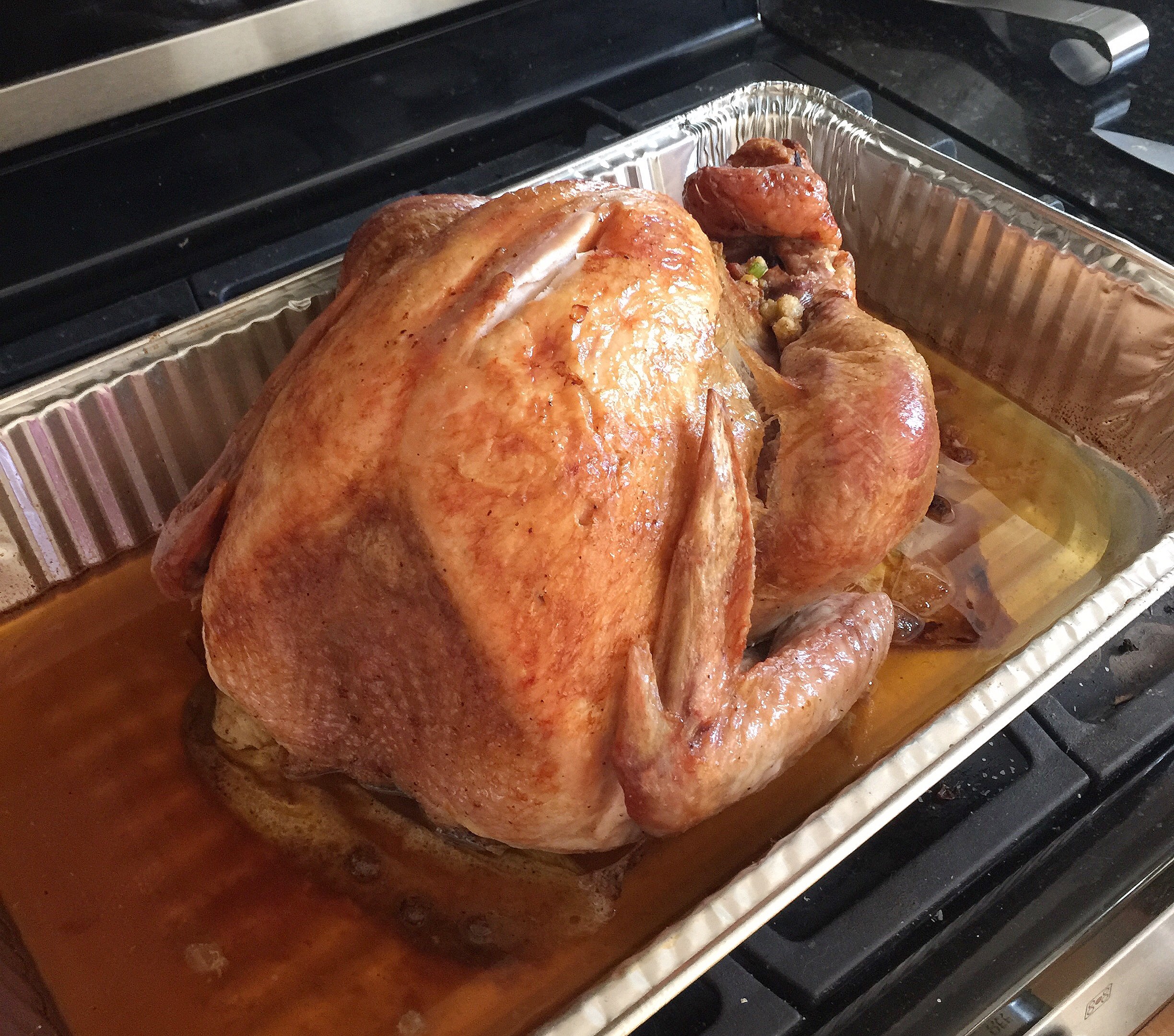 So like I said, I forgot to take a pic of the stuffing done, but here is the turkey done, and you can see back there it’s golden brown stuffing. Your stuffing should be gold brown when done.

I was actually gonna try to edit my pic on the left after I put it in the casserole dish so it looked golden brown and done, but I didn’t want to deceive you, and I’m too lazy for that. So picture the left pic (my stuffing) looking golden brown like the Pepperidge Farm stuffing on the right. See my bird stuffing does look like that!!! Sorry guys! I failed you. At this point, you can mix the bird and casserole stuffing together for a big batch and serve, or you can remove the bird stuffing into another container and serve them each as their own.

Servings: 6 – 8 depending on how much your family & friends eat – you can double or triple this if you have more peeps coming

There you have simple T-day stuffing! It’s not so bad, I’m just a talker really. I hope you all enjoy it and have an amazing Thanksgiving!