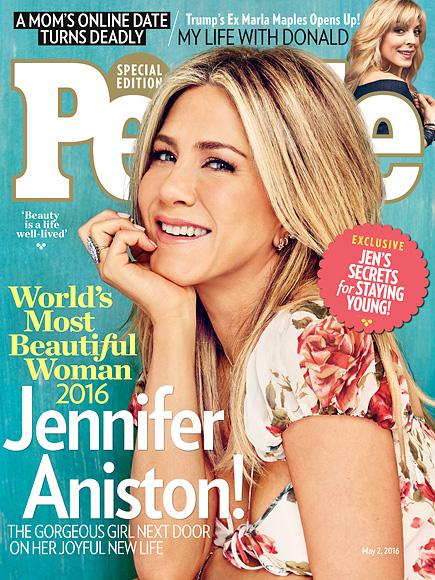 We need to talk about this…First and foremost, I’m going to put a disclaimer out there that I do not have anything against Jennifer Aniston or PEOPLE, but I do have some issues with this issue in particular.

To start, it’s 2016 – says that on the magazine. 20 f-ing 16 and we have a popular magazine picking a MOST BEAUTIFUL WOMAN? Really? This is still happening? So there it is, my first problem with all this. I just feel like there is already so much going on for women that in 2016, we don’t need a most beautiful woman. We don’t need yet another publication or media outlet feeding everyone the notion of most beautiful or that beauty matters above all the rest. Yea, of course you wanna look and feel your best, most confident self, that is completely understandable. I’m just exhausted by the fact that a magazine is really still putting this shit out there, picking ONE woman to single out as “most beautiful.” Other publications, like Glamour for instance, have gone the route of naming the most influential women of the year. The magazine picks a wide range of women making notable and inspiring contributions to society. That’s awesome and may lead a reader to do something out of their comfort zone rather than just try one of the top 10 mascaras they are pushing on the next page.

The day to day is hard enough for women already. EVERYTHING in our life costs more (dry cleaning *don’t get me started on that*, clothing, personal care products, etc.). We are in a constant battle over the rights to our bodies and healthcare.There are still issues with workplace equality. Finally, there is the non-stop beauty standard that’s always being shoved in our faces along with all the “tips & tricks,” products and services that come with trying to achieve that standard. I just don’t understand why PEOPLE needs to perpetuate it with this magazine issue. Some of you might say chill out, it’s just a magazine. It’s fodder like the Real Housewives or indulging in trashy tabloids and internet blogs (lol). Fine, maybe it is just fodder, but that leads me to my next point.

The most creative, best woman in 2016 PEOPLE could pick is Jennifer Aniston? Yes – she is obviously beautiful; I’m saying she’s not pretty, don’t worry. Also, please note this is coming from a white girl with light brown hair and blue eyes. I think, I’m supposed to look at her and be like yea, I can relate to her. But I can’t. And the tiredness sets in all over again. There are SO MANY other beautiful female options out there. But lets go back in time for a moment. I decided to do some quick research on this wonderful achievement the magazine bestows. It looks like in 1999 the honor changed from most beautiful person to most beautiful woman (yay for us). In the past 18 years they have been handing out this award, there have only been FOUR women that have been another race other than caucasian. They read as follows:

But I guess that’s my point, only four times and each time there’s been some kind of qualifier…Yet someone like Jennifer Aniston just needs to be promoting a probably crappy movie (Mother’s Day) and she gets the cover? I’m just kind of confused by that. What about Sofia Vergara? She’s “MiniVan Majority” approved (quick sidebar – “MiniVan Majority” is phrase coined by Lainey from Lainey Gossip – Anne Helen Petersen from BuzzFeed has a good definition of what the MiniVan Majority is a few paragraphs down in this article about Jennifer Garner and her career path). I digressed slightly; however, I think you need to understand the MiniVan Majority because that’s PEOPLE’s core demographic. So yea – Sofia Vergara is conventionally beautiful, on a popular family sitcom. Why not her? I’m actually shocked Kerry Washington hasn’t been on there. For some reason, I thought she had been…There is also Gina Rodriguez from Jane the Virgin. Everyone seems to love her. Or how about giving a “newcomer” a push like Fresh Off the Boat’s Constance Wu? Mindy Khaling is doing great things out there and promoting positive body images for women. With all that’s going on with The Honest Company, it’d be interesting to hear from Jessica Alba. OMG! Priyanka Chopra from ABC’s Quantico is absolutely STUNNING! I wrote about how gorgeous she is in my 2016 Oscars Fashion Review! She is also the Indian lead actress on a network television drama – that’s a big deal. And to be diverse, I can think of a few white women who deserve it more, too. Daisy Ridley – she just starred in the BIGGEST MOVIE OF ALL TIME as the female LEAD AND HERO which is great for little girl out there to see. Ashley Graham was the first plus sized woman to EVER get the cover of Sports Illustrated’s Swimsuit Edition. She is obviously gorgeous but still probably has some interesting things to say about the experience along with being a plus-sized role model. How about Amy Schumer? She just came off a HUGE year, very pretty but not your status quo pretty. See! I just thought of TEN women that are not snooze-fest Jennifer Aniston. She is just so boring…the preview of the interview on-line is even boring. Click here to read it. It’s nothing you haven’t heard before. She feels great when she’s “strong and healthy” – don’t we all? Her husband is great – no she’s gonna say he’s terrible. She watches what she eats but “in moderation” – sure she does. It’s the lamest. And I literally can’t with all the Aveeno ads. I know, I know, I should calm down because it IS just one big advertisement. I just felt like some of this needed to be said.

BTW – if you scroll through the comments, looks like I’m not the only one who felt like this chose was not the best one out there. I also just scrolled through PEOPLE’s Instagram comments and surprisingly a lot of people said why not Sofia Vergara? I made that suggestion above before I looked at the comments – Wahoo!

Like I said above, I have no issue with Jennifer Aniston, but I feel like in this day and age, we could do better. I know this was all conveniently timed publicity for her and her movie, and PEOPLE felt like picking her was a “sure bet” and probably safe choice to sell magazines; however, I believe they are really overestimating the American population’s (a) need for this issue in the first place and (b) who they actually consider “most beautiful” now.