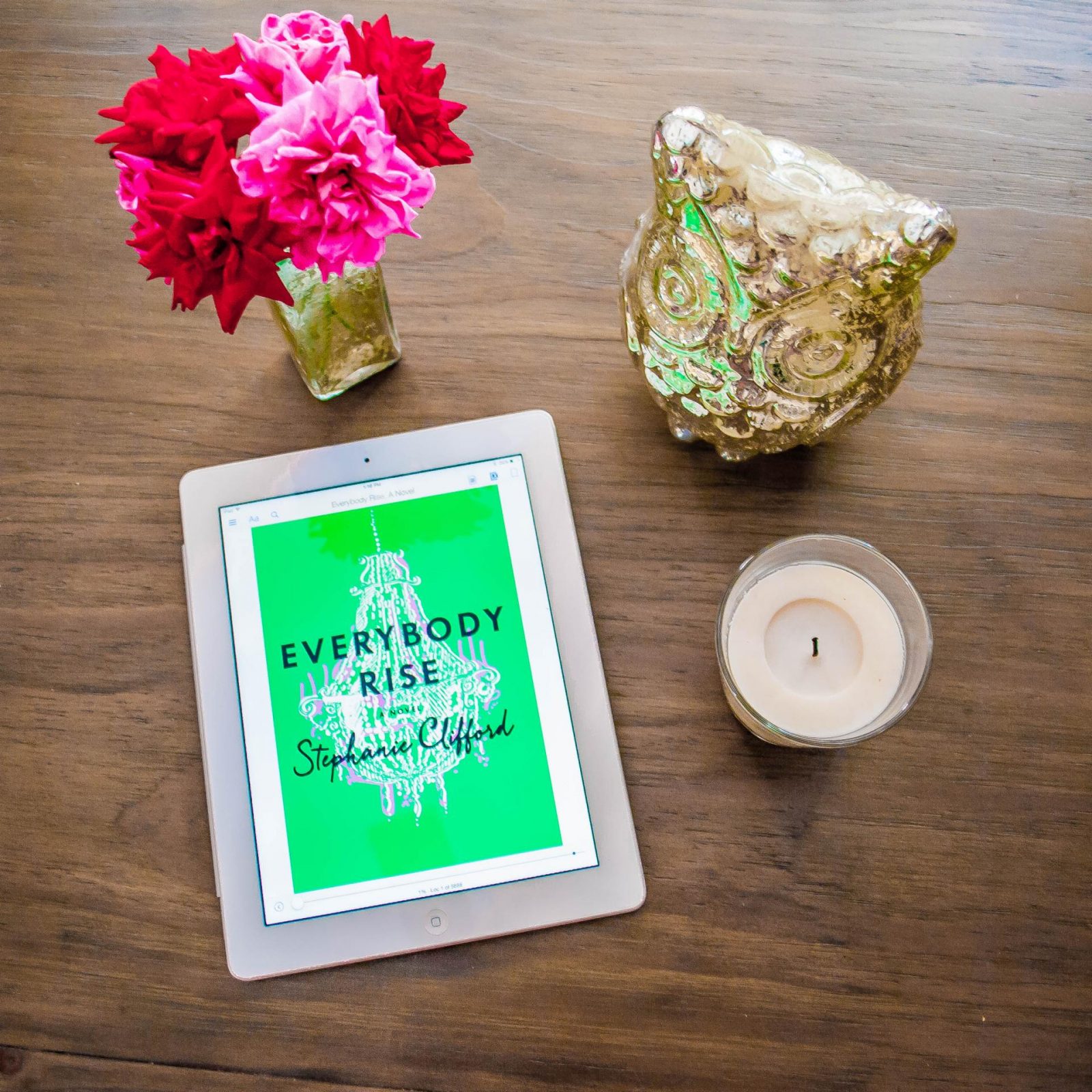 Everybody Rise by Stephanie Clifford was set mostly in Manhattan circa 2007 – 2008 pre-stock market crash – I can’t believe I am writing about a stock market crash I lived through and not 1929’s crash…I digress. Right before the housing bust, the richest 1% were living the most extravagant, superfluous lives ever. In the midst of this decadence, you meet Evelyn Beegan – a lower “upper-class” or even upper “middle-class” mid twenty-something. She is friends with a few of these über rich but is not one of them yet. Evelyn’s father, Dale Beegan, was a salt of the earth North Carolinian turned star plaintiff’s attorney living in Maryland, working hard for his family and grappling with his own demons that would affect their family forever. Her mother, Barbara Beegan, was a chronic social-climbing try-hard pusher, always nudging Evelyn to rise above her lot in life. Barbara was beyond frustrating and pretty much the worst, all of the time. Because of Barbara, Evelyn went to boarding school at Sheffield where she met her two best friends, Charlotte Macmillan and Preston Hacking.

Evelyn’s swim with the super rich began as a simple toe-dip due her job at a new social networking site called People Like Us (PLU) which was supposed to be Facebook for the world’s elite. Because of prep school background, Evelyn managed to finagle her way as the head of membership recruitment at PLU. She then began tapping into her real-life social networks, mainly Preston and Charlotte, leveraging them to gain access to the crème de la crème of Manhattan. Upon meeting Camilla Rutherford, socialite extraordinaire, Evelyn becomes fully obsessed with her and being apart of that exclusive world. In the beginning, it’s almost like a Cady Heron and Regina George mean-girls type relationship. Evelyn gets closer to Camilla (not to take her down) but because she has something to gain from it, but eventually Evelyn is enamored with dinners at members only clubs in Manhattan, houses in Nantucket and Southampton and “camps” in the Adirondacks. The glitter and glamour blinded her to no end, pushing aside literally everything, especially her family, friends and financial stability. No spoilers in this post so I will stop there.

So, was I absolutely in love with the people and world Clifford painted in Everybody Rise? Honestly, no, I was not. Everybody Rise by Stephanie Clifford is surface scratch into what could have been a very excellent look into the world 99% of the population doesn’t live along with the struggle to be apart of that world. For me, it didn’t hit that extra mile though. I wanted to love this book, I swear, I did! It’s right up my alley. I LOVE books about the lavish lives of old world money, luxury and super spending, but this novel really fell flat. Overall, I felt like it was pretty “meh” when it could have been amazing. First off, I struggled getting drawn in. I actually started it in January and for some reason, the novel didn’t “hook” me – so, I put it down, coming back to it this past June, finally finishing it. The world Clifford is writing about is supposed to be alluring, seducing; however, she always seemed to fall short of pure seduction. The novel is often compared to Gossip Girl, but Camilla Rutherford was no Blair Waldorf or Serena van der Woodsen – I believe Clifford was going for some kind of hybrid of the two famous fictional socialites, gorgeous don’t mess with me Queen Bee-type. Clifford’s writing style was both lengthy but not descriptive enough at the same time which I still can’t even comprehend. Even the climax, I found myself skimming through lengthy sentences instead of eating it up, clinging to every word. I kept feeling the glam was wasn’t sparkly enough, wasn’t flashy enough, and the characters weren’t developed enough.

You cound not get behind a single one of these characters. Each of them were one note and flat. You were supposed to feel sorry for Nic, Evelyn’s dopey boyfriend, but something was missing from him for you to develop any level of sympathy. Everyone was also pretty insufferable. They each had moments of greatness but not enough for you to ever like a single one, especially Evelyn herself. She was awful and not in a TifAni FaNeli-way (Luckiest Girl Alive), who had more layers to peel back than onion. Evelyn made you feel frustration and anger for her dumb decisions, but when push came to shove and I was supposed to cheer for her, I was just like “eh – I don’t really care anymore”. I didn’t care so much to the point where I started this post thinking I was going to write a spoiler section much like I did in my Luckiest Girl Alive Review, but I’m not even compelled to spoil what little actually happened. It simply was not that thrilling or even coming to age, life changing.

BOTTOM LINE – WOULD I RECOMMEND THIS? Alas, I actually would. I didn’t HATE it like I HATED The Girl on the Train, but obviously, I didn’t love it like Luckiest Girl Alive. Everybody Rise is a middle of the road read. It’s decent enough for a plane ride, commuting on public trans, beach or pool. On the flip side, it’s not compelling enough to make you want to hide in the bathroom stall at work and secretly read it or stay up WAY past your bedtime because you just-can’t-put-it-down. You also will not miss any of the characters or wonder what they are doing when you finished (yes, that might make me a weirdo but I wonder what my fave characters are up to sometimes lol). So in a nutshell, read Everybody Rise if you have nothing else to do – if not, skip to Luckiest Girl Alive and some of my other fave books which you can find in my 2015 Year End Book Round-Up.