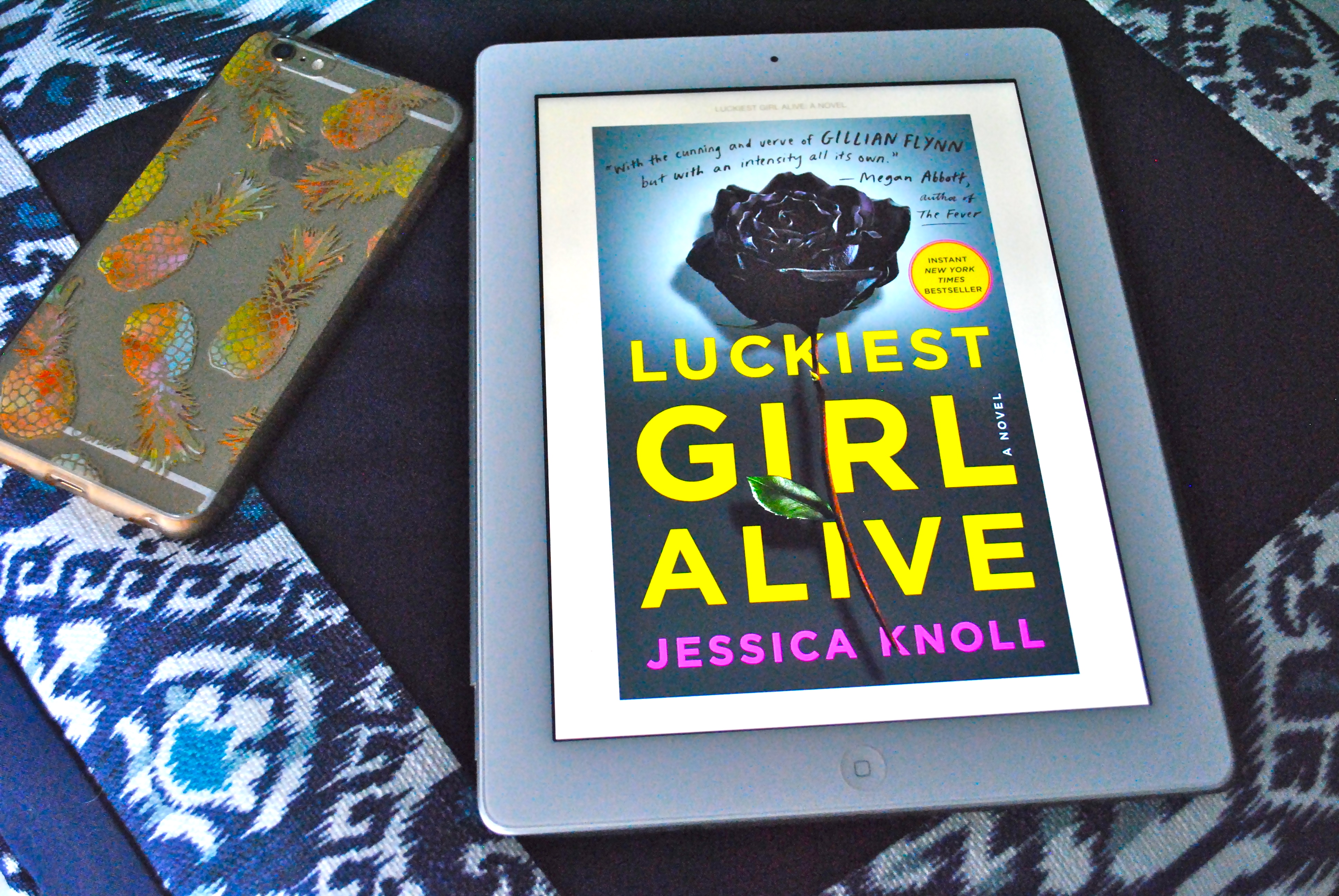 There will be spoilers, but I will alert you before they begin!

Jessica Knoll’s Luckiest Girl Alive is my favorite book of 2015, so far, and that’s tough to say because I have a very different super close second (review coming later for that one). At one point, a little bit over half way through I actually hated it for making me feel so uncomfortable and outraged. I had a lot of feelings with this one which turned out to be a good thing. Luckiest Girl Alive follows TifAni FaNeli’s (yes – her name is spelled that way throughout the whole book) life from the end of eighth grade to the end of her late twenties along with all the dark twists and turns she encountered.  Knoll paid great attention to detail when creating her protagonist, FaNeli, sometimes too much.  My only complaint was at points I felt like her descriptions were too drawn out, slowing the book down at times. I found myself speed/glossing over some of the overly descriptive parts, but that’s only because I wanted to know what was going to happen next so much that I could not stand reading the description of the pizza by the slice place in extensive detail. I even wanted to try glancing ahead to see if I could figure it out and/or google the ending because I often times like to spoil shit for myself like that. The novel has enough brand name dropping and glitz to dazzle any reader, without falling into that annoying every other line “chick lit” feeling. Don’t worry, this was not chick lit despite the rags to WASP-y riches tail of magazine column writer FaNeli (or Ani as she reinvents herself) who calculating cultivated the perfect, effortless life with the impeccable fiancé.

Knoll tackles some really heavy events that are very relevant to current events today. I feel like most people can relate to at minimum, Ani’s eye rolls and parental embarrassment, but some might also connect with her on a deeper level as she struggles and fights through her high school demons which haunt her throughout her adult life, driving her to reinvent herself to what she thinks a fulfilling life would entail. This life consists of that perfect job and über rich, gorgeous, good last name and breeding fiancé, Luke Harrison. Overall, the story line drops some big bombs most readers will not see coming, but there will be a few moments you might be able to pick up on ahead of time. The perfect amount of moments that you can sniff out and say “yep, I still got it.” This book is a must for your reading list and can/should be enjoyed at anytime!

And now we are ending the safe zone. There will be SPOILERS ahead so proceed at your own risk!

You are entering the ***SPOILER*** zone. You have been warned!

Okay – the nitty gritty of crazy, “kooky” Ani. A lot of people complain about her; however, I think she’s an excellent character. She gets a lot of Amy Dunne comparisons which I can see as she, like Dunne, creates that “cool girl” persona. That elusive “cool girl,” we all know who she is – while playing video games with the guys, she can down more than half a pizza plus beers yet stay an effortless size 2 (of course), never gets offended at tasteless dude-jokes, even laughs at them, looks like she spent 2 minutes and $10 getting ready in her casual “jeans & t-shirt” look that most likely cost $100’s and took hours to put together. I feel like; what girl hasn’t tried to be the “cool girl” at some point in her life…honestly, I know, I have been there. This striving to be perfect at everything is one of her most endearing but grating characteristics. You nod your head at the 700 calorie a day diet she goes on for her wedding and the documentary because you KNOW this happens, but you also just want to shake her and say eat a fucking burger! From early on Ani is pressured to be a certain way, including by her own mother always trying to put make up on her and have her get in with the “well-to-do kids.” The emotions you encounter experiencing Ani’s situations are intense. She makes you constantly question what you would have done throughout the book. Would you have reported the soccer boys? Would you let your boss steal your ideas in a meetings? Would you have had the same thought when she came to disclose about Dean later, the reason why she cut him some momentary sympathy later? The list can go on…And even though you might not always like everything she chooses to do, she really makes you think about what kind of person you are or would be in a range of annoying to dismal situations.

Ani’s character is great, but what really drives the story are two sets of dramatic plot points. The first being Ani’s series of sexual assaults. I am grouping them all together (even though they are each awful in their own right) – Liam’s rape to what Peyton did and the two incidents with Dean. This is all too relevant with the world today. You cannot surf the Internet without finding a story similar to this: lacrosse team gang rapes girl…college frat boy accused of sexual assault and so on – even including high school students, like Ani’s incidents. And you can also count on people having the reaction of the girl “should have known better” than to put herself into that kind of situation or worse yet that she “was asking for it.” No one should ever have to go through that much less a 14 year old. Knoll does an admirable job painting the 14 year old Ani’s rapes and the circumstances surrounding it like turning the culprits in, telling your parents, the student population reaction. It’s all too sad and makes you as reader feel rage. Not just for how she’s treated by everyone but because she didn’t stand up for herself either; however, it’s understandable that she didn’t considering how society all too often turns sexual assault victims into villains, something that definitely needs to change.

And then there was the attack on the school by Arthur, her best friend, and Ben, who she didn’t even know. I remember when Columbine happened when I was in 7th grade. School attacks (and, violence in general nowadays) were not as ubiquitous when the events surrounding Ani’s attacks took place at her private high school, Bradley. I went to a similar history-laden private prep school in the same time period she did, and I felt safe and secure at my school too, the same way the students at her school did. They didn’t factor the crazy, terrible bullying as the root of the problem. Arthur and his friend, Ben, were bullied to their limits and even saw others- Ani – pushed beyond all measures. Kids are cruel…adults are too, which was indicated in the way the media turned on Ani after the attack, trying to find the nearest living scapegoat. It’s sad kids push other kids to these terrible limits with these devastating, destructive outcomes. Knoll brings this and other serious high school/society problems to light in dramatic fashion, again prompting the reader to think about their own actions and/or reactions.

Finally, big spoiler here, I’m so happy she did not end up with either guy! She ended up on her own! I thought for sure she would cliché-ly end up with Mr. Larson (mild-ick factor due to their relationship), but she didn’t! Wahoo! Ani ends up ditching Luke (ugh thank God, he was horrible) at their rehearsal dinner. This was one of the more impressive moves Ani made throughout the whole book. Finally, she was going to make herself happy, probably for the first time ever. Despite her mother’s objections, saying something along the lines of “regretting the decision for the rest of her living life.” Ani realized the WASP-y, perfect, Nantucket life she thought she needed to prove everyone she surpassed survival and really made something of her life, just wasn’t what she needed after all. Her worth no longer depended on the emerald engagement or marrying the right man – Ani finally started on the path of realizing her own self worth, flaws and all.

Luckiest Girl Alive was an excellent, compelling read. The novel and characters are people you can relate to, sympathize with and also even despise. I definitely recommend it for any reader whether they are just looking for an exciting, thrilling read or a thought provoking read on many issues that are plaguing our society today.